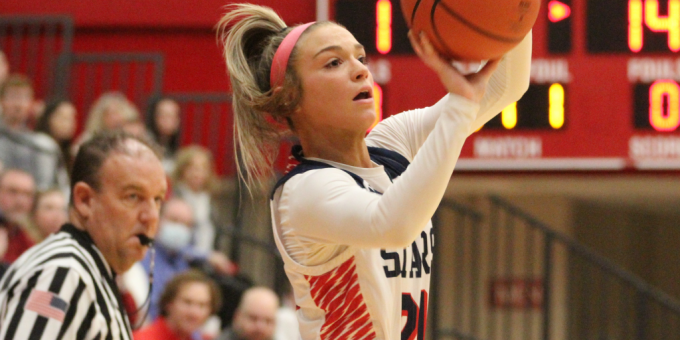 BEDFORD – Individual glory was the last point on Karsyn Norman’s priority list during the 2021-22 season. All her boundless energy, all her laser-beam focus and percolating passion, was locked on leading Bedford North Lawrence to a Class 4A state championship. While that goal was blocked in the Elite Eight, her reward for a fantastic season was a place among Indiana’s elite.

Norman, the point guard deluxe and the heartbeat of BNL’s success, was named to the core group for the Indiana Junior All-Stars. She will join the state’s best of the class of 2023 in a renewal of the series with Kentucky and the scrimmage with the elder Indiana All-Stars in June.

Norman is the seventh Star to earn a place on the Junior squad (which was started in 1996). The last five to wear the Junior jersey went on to represent Indiana on the Senior version of the All-Star team. Making that roster has been a goal since she was barely big enough to launch a jumper to a 10-foot goal. This stepping stone makes her feel 10 feet tall.

“It’s really cool,” Norman said. “It’s a huge deal, an elite group to be a part of. It’s a lot of really good players, and being on that list is an honor. Just making the roster of the top juniors shows you know what you’re doing.”

Her game was proof of that. Norman averaged 15.0 points, 3.0 steals and 2.8 assists as the Stars finished 24-3. She was named First Team in the Hoosier Hills Conference and Supreme 15 by the Indiana Basketball Coaches Association. She’s a mid-major Div. I recruiting target, and this honor should only add another layer of interest.

“It’s an outstanding achievement for her,” BNL coach Jeff Allen said. “It shows what a great junior year she had. She made such tremendous strides from her sophomore year. The big thing was her shot selection. She really started to understand about shooting the ball. It increased her scoring, and she’s always been a great defender.”

Norman showed flashes of her potential during a sensational six-game burst to end her sophomore campaign and finished by averaging 9.5 points. Asked to assume a larger scoring role, she exploded for a career-high 30 points against Warren Central, totaled 26 in the regional final battle with Franklin, and hit double figures in 23 games.

“It was a process,” Norman said. “I was starting to figure out how to play the role of scorer. I’ve definitely been a pass-first guard my whole life. I progressed toward the end of the year. But I can’t put a grade on myself. I’m very hard on myself. I wouldn’t be anywhere near an A.”

During the ‘silly season’ of AAU tournaments and recruiting pressure, Norman has been busy making unofficial visits to Davidson, Loyola (Chicago) and others. A trip to Marquette is planned for the future. She can’t make official visits until the NCAA Tournament concludes.

“During the season I was dead set on winning a state championship,” she said. “I was really focused on that. Now the offseason is building the relationships with coaches. That’s the best thing about the game. You make so many relationships. I have a close relationship with so many. That’s what the game does.”

“What separates the great players from the good players is character,” he said. “You have to look at the overall body of work, not only what they’ve done individually but what their team has achieved, how they’ve represented their program. Talent obviously plays the biggest part, but you have to look at what they’ve done from the standpoint of helping their program, what type of teammate they are, what type of character they have.

“I think she’s the best point guard in the state.”

Norman now stands alongside Fabrianne Perez (1999), Jenna Allen, Dominque McBryde and Alexa Bailey (2014), Jorie Allen (2018) and Chloe McKnight (2020) on the BNL list of Junior All-Stars. That’s a who’s-who of the program during this new century.

“That’s a big part of our success, that we’ve had a tremendous amount of kids from our community that not only have great basketball skill but have the desire to be good and play the type of basketball we like to play,” Allen said. “It’s a big blessing for us. She’s another in a long line of outstanding basketball players, and I believe her best basketball is in front of her. She will continue to get better. She has a level of athleticism that is unique. When you combine that with her skill, it makes her a high-level player.”

Norman’s big-picture plan still rests on one goal. She will continue her work to reach it.

“I’m going to be a senior, and if I want to go to the state championship, a lot of that is on my back,” she said. “I have to lead my team, bring it up another step.”

BNL will host the Junior games with Kentucky on June 5. The scrimmage against the Senior All-Stars is set for June 8.