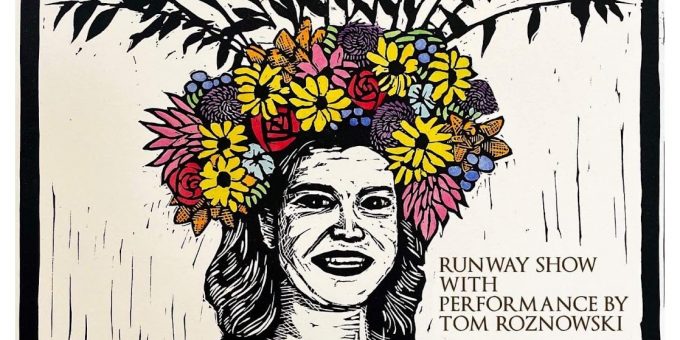 BLOOMINGTON – On Sunday, April 10, Bloomington Trashion Refashion 2022 presented by Plato’s Closet returns live on stage at the Buskirk-Chumley Theater for the first time since 2019.

A flagship of the Bloomington arts and entertainment scene since 2010, the annual Trashion Refashion runway show gathers town and gown, artists and environmentalists at the intersection of imagination and sustainability. In this joyful return to Bloomington’s landmark performance venue in its centennial year, the 13th Trashion Refashion Show will highlight more than 70 original looks upcycled from discarded items by local artists and modeled by a diverse troupe of community residents.

Produced by and supporting Discardia, a Center for Sustainable Living project, the event will feature two runway shows of locally made couture and a musical performance by singer-songwriter Tom Roznowski, with violinist Carolyn Dutton.

Starting at 7 p.m. (with doors opening at 6 p.m.) Bloomington Trashion Refashion 2022 presented by Plato’s Closet takes place Sunday, April 10 at the Buskirk-Chumley Theater, at 114 E. Kirkwood Avenue in Bloomington. General admission tickets for the all-ages show are available for $15 in advance, $20 day of the show, and $10 for children and students at the BCT box office or on its website at https://web.ovationtix.com/trs/pe.c/11001619.

A “go-figure” fashion event, the Trashion Refashion runway show promotes environmental sustainability and artistic creativity while challenging conventional notions about beauty and consumerism. Each of the juried show’s 70 designs consists of at least 90% discarded materials, either rescued from the waste stream (Trashion) or transformed from underutilized garments (Refashion). In the designs on parade, blown bicycle tires, broken camp chairs, unfortunate bridesmaid’s dresses, and forlorn dungarees are reënvisioned as everything from easy-to-wear to haute couture. The show’s designers are broadly representative of the Bloomington community from university students to local artists to environmental activists.  The show is also committed to cultivating diversity among its models with regard to gender, age, race, body type, and other categories.

Plato’s Closet is the title sponsor for the 2022 Bloomington Trashion Refashion Show.  Show organizers seek additional support from local organizations and businesses, who are invited to learn more at contact@bloomingtontrashion.org.

More about the Center for Sustainable Living

Center for Sustainable Living (CSL) is a local nonprofit that for more than 25 years has been bringing people together who care for the Earth and seek to live well, together, by leading or contributing to change-making projects related to transportation, food, renewable energy, the built environment, and waste reduction, among other areas.  Among the 12 projects, CSL supports are the Bloomington Community Bike Project, Discardia, Solar Indiana Renewable Energy Network or SIREN, Habitat Stewards, and Bring Your Bag Bloomington.

Tom Roznowski is a songwriter, a storyteller, a performer, and a singer. He expresses himself creatively in a variety of forms including original songs, the printed word, broadcast media, and documentary film. He is widely known for his original songs, which he performs live and has presented on four albums: A Well-Traveled Porch, Voice Beyond The Hill, This Place In Time, and selections on Wilderness Plots. As a live performer, Tom Roznowski has shared the stage with a number of artists including John Prine, Lyle Lovett, Richard Thompson, Gillian Welch, and David Rawlings. Broadcast Saturday nights at 6 p.m. on WFIU/Indiana Public Media, his radio program Porchlight with Tom Roznowski is a mix of story, song, and sensibility perhaps best described as “an oasis from the everyday.”