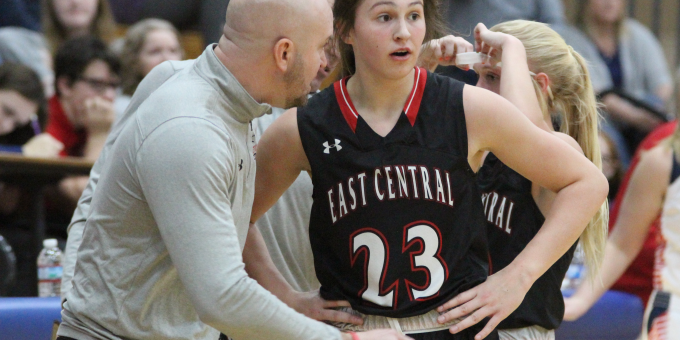 COLUMBUS – East Central coach Kevin Moore is confused, perplexed, bewildered. And that’s not easily done. How can the best player – and any debate about that unofficial title starts with EC star Josie Trabel – in a four-team regional packed with superstars escape radar detection?

Is she invisible? Hardly. Ask any coach who scouts the Trojans. Hard to miss a 6-foot forward with interior power and perimeter skills. She stands out like police lights on a dark highway, visible for miles. Is it because East Central is tucked away in the far southeast corner of the state, just off a brief speedbump exit on I-74, away from media hubs, blanketed in Cincinnati’s shadow? Perhaps, although the Trojans are making their third straight regional appearance. They’re no secret among those in the know.

Yet Trabel, a junior who averages 17.2 points and 7.1 rebounds, who torched Columbus East for a school-record 36 points in the sectional final, has yet to receive a scholarship offer from a Div. I program. Maybe she needs a press agent. Whoever opens their eyes to ‘discover’ her will get a steal. Rest assured, Franklin’s scouting report will start – and probably finish – with notes about Trabel. She will get all the attention she deserves when the Trojans collide with the defending regional champion in the first semifinal on Saturday.

Trabel and the Trojans – that sounds like a rock band – will be in the spotlight as they look to dethrone the Grizzly Cubs. They’ve ran into BNL the last two seasons, falling in the final two seasons ago and suffering a semifinal loss last year. The challenge now is no less severe. But with Trabel and senior guard Hope Fox (14.3 points), East Central has potential firepower to keep pace with the explosive Cubs.

“It starts with Trabel and Fox,” Franklin coach Josh Sabiol said. “Their whole team is very strong. It’s going to be a test for us.”

Trabel has added 3-point range to her arsenal, which seems a little unfair when defending a 6-footer. She hit three from distance during the win over East, she was 4-for-4 from there in a recent victory over Mt. Vernon. She has shot 42 percent from that line this season. What college coach wouldn’t want that?

“She’s put in a lot of reps,” Moore said. “She was missing shots before because it was flat, not a lot of lift, and kids go thorugh slumps. But in the last few games she’s almost 45 percent from the 3-point line. With her ability to get to the rim, teams can’t play soft on her now. She’s a tough matchup.”

When discussing the 3-point line, nobody shines there like Franklin. The Cubs are bombardiers, having launched an incredible 706 treys (nearly half their field-goal attempts). They have four players who have fired over 100. They also make them, by the way. That’s the same formula that got them to the semistate last season.

“People think about our shooting, but I feel we’re flexible enough for whatever the game presents,” Sabol said. “We can play multiple styles and multiple ways. That’s the mark of a good team. Ashlyn has been fantastic. They (including her sister Adelyn Walker) bought in right away and fit into our style.

“We really upped our schedule this year. We knew, if we were going to get back here and have success, we had to have a great offseason and make our schedule more difficult. Knowing we were one game away from playing for a state championship has really motivated the girls to get back.”

Franklin’s only loss came against Westfield (42-40 in overtime) in the first round of the Hall of Fame Classic. The Cubs have won 9 in a row, including an impressive 82-57 shoot down of Jennings County to end the regular season. They are second in the state in scoring at 68.6 points per game, and they’ve hit 80-plus seven times.

“The pace of the game they want to play, I’m not saying we don’t want to play that pace,” Moore said. “We’re a little chameleon-like where if we have to grind one out, we can. But we can’t give up transition buckets on makes or misses. We’ll talk about defending the 3-line, and a lot of threes equal a lot of long rebounds. We have to be the one to get 50-50 balls.

“We’re trending in the right direction (with 11 straight wins). Every since the Bedford deal (losing two in the holiday tournament at BNL), where we played two really good teams and competed well, we’ve played extremely smart basketball. We’ve not turned it over much, we’ve limited offensive rebounds. I’m ecstatic about how we’re playing.”

While East Central will defend the 3-line, Franklin will have to attack the glass. Those are the battle lines to determine the victor.

“We’ll have to rebound well, hold them to one shot,” Sabol said. “Hopefully we can get out and go a little bit, get the pace in our favor. We want to run and gun, but we’ve also been succcesful with games in the 40s.”

The regional champion will face the winner from Decatur in the one-game semistate (at either Jasper or Jeffersonville) on Feb. 19.

Semifinal round at Columbus North

Game notes: Franklin is the defending regional champion, and the Grizzly Cubs have won five regionals in program history. The Trojans have never won a regional title. The winner will face either No.3 BNL or Castle in the championship game. Franklin ranks second in the state in scoring at 68.6 points per game.