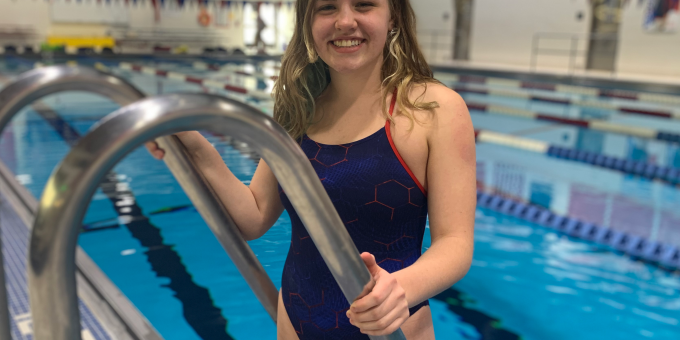 BEDFORD – Emma Gabhart had company on the top step of the sectional podium, sharing the stage with the unofficial team mascot. Since she swims for Bedford North Lawrence, that had to be something related to Stars, correct?

Oh no. After winning two postseason races and qualifying for the IHSAA state meet for a second straight year, Gabhart was holding “Shellie the Skellie” as she accepted the blue ribbon. “Shellie” is a 3-foot miniature skeleton who made the most of the photo op. The kid holding her is bad to the bone.

Gabhart will stand alone, a skeleton crew of one as BNL’s lone state qualifier, when she hits the water for the state preliminary races at IUPUI’s famous Natatorium on Friday night, hoping to make waves and advance to Saturday’s finals or consolation races in the 200-yard individual medley and the 100 butterfly.

The top 16 in each event (with a field of 32 competitors) will earn the callback for the championship races (places 1-8 after the prelims) or consolations (places 9-16). Gabhart, a junior, is seeded 24th in the medley and 25th in the butterfly, which means there’s work to do. But as she finishes the taper process to physically peak for the state meet, she has time to cut time.

She also has the experience factor in her favor. Gabhart finished 14th in the state in the medley last year, becoming BNL’s first second-day swimmer in 12 years and setting a school record in the process, so she’s primed for a return trip.

“Last year was really scary, really nervous,” Gabhart said. “But now I’m really excited, more for the competition. I know what it’s like. It was be easier to race, and I have a chance. Last year I didn’t think that way. I feel ready.”

Gabhart won the 200 IM during the sectional at Jasper in 2:10.96, then came back to capture the butterfly in 58.79. She plans to make a run at breaking both school records (Sidney Carlile owns the butterfly mark).

“We tapered her for this meet, we expected her to sail through the sectional, no problem,” BNL coach Adam Young said. “So I’m expecting her to drop time, and she’ll have to do it to make it to Saturday. She did it last year, there’s no reason to think she can’t this year. She should be able to get the records. That would be a great end to the season.”

The season hasn’t been all smooth sailing. She had to sit out five days because of virus protocols, now she’s sporting a broken big left toe after an accident. Oops. But that just hurts when she pushes off the wall during turns. In the middle of the pool, although the sport is 80 percent kicking, Gabhart’s only pain is seeing someone ahead of her. That rarely happens.

Even with the nickname “Marshmallow,” nobody is tougher. As the fourth child among nine, she’s had to be.

”I’ve always had that competitiveness,” she said. “I’m really competitive with my siblings. And I want to break that butterfly record. Hopefully I can break the 200 IM record again. We’ll see.”

Action in the prelims will begin at 6 p.m. on Friday. The finals and and consolations are set for 1 p.m. the next day.