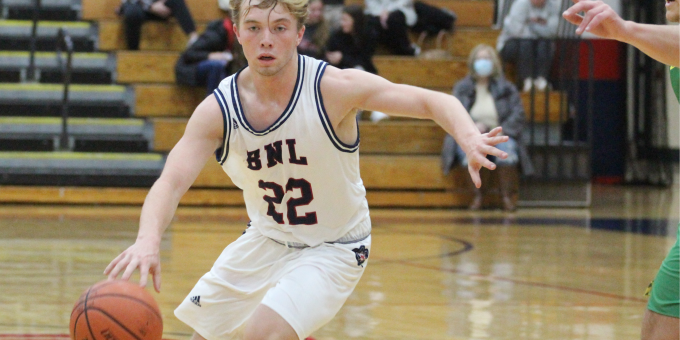 BEDFORD – Bedford North Lawrence started its brutal five-game, 11-day road trip with a triumph at Loogootee. Does the road get any easier? Not really.

After opening with an overtime triumph over the Lions, ranked No.5 in Class A, the Stars will visit two more notoriously-tough destinations during a rare Thursday-Friday doubleheader, journeying to Jeffersonville for the rescheduled conference clash with the Red Devils before heading to Brownstown the following night.

BNL, now 8-7 with a two-game winning streak, certainly needed the victory boost for the bumpy road ahead. The Stars are living the Willie Nelson life – on the road again. “Insisting that the world keep turning our way. And our way is on the road again.”

“We’re just happy to play,” BNL coach Jeff Hein said. “We need to continue to play, continue to learn. Every opportunity we have will be another learning lesson before the tournament.”

What did the Stars learn? Defense does most of the insisting, the reason the outcome at Loogootee turned their way. Scorers can struggle, leaders can foul out, adversity can be cruel. That’s all part of life away from home.

“We showed a lot of toughness, showed a lot of grit,” Hein said. “We overcame a lot of things. We missed a lot of layups, a lot of free throws, but we rebounded the ball well and took care of the ball. We gritted one out. That’s the way these kids are. They play hard, they scrap. We find ways to overcome some of our deficiencies.”

BNL had to turn to more than the usual suspects at Loogootee. Colton Staggs had 13 points (despite a skittish shooting night), but Trace Rynders was perfect from long distance and Kaedyn Bennett also totaled 12 points. Kole Bailey came off the bench with critical plays and points, especially after scoring leader Colten Leach fouled out in regulation.

“Every game we win, it’s a team effort.” Hein said. “Everyone is contributing and playing well. We had balance. Rynders stepped up and hit four 3s, Bennett had 12 points, so we had contributions from other spots. That’s important for us. We have to do it as a team. We don’t have one individual who can go beat people.”

BNL’s next assignment will be a clash with the Red Devils (4-8), who have played only once since Jan. 22 while continuing to deal with virus issues and absences. That will be followed by a battle with the Braves, who feature sophomore guard Jack Benter, the son of coach David Benter. The young gun exploded for a school-record 11 3-pointers and totaled 41 points during a recent win over Austin.

Brownstown, which will be in action at Washington on Thursday, ranks 20th in the state in scoring at 66.6 points per game.

Last meeting: Jeffersonville swept two games from BNL last season, winning 54-49 during the regular-season clash at BNL and 57-53 in sectional final at Seymour.

Game notes: Jeffersonville is the defending sectional champion. BNL won its last trip to Johnson Arena, posting a 61-60 victory in 2020. This game was originally scheduled for Jan. 28. Original preview

Records: BNL 8-7 (at Jeffersonville on Thursday); Brownstown 14-3 (at Washington on Thursday), ranked No.11 in Class 3A

Last meeting: During the 2020 season, BNL won 47-39 at Brownstown. Brayton Bailey scored 27 points for the Stars while Isaiah Wineinger had 14 for the Braves.

Game notes: BNL has won three straight in the series. The Braves are undefeated at home this season.