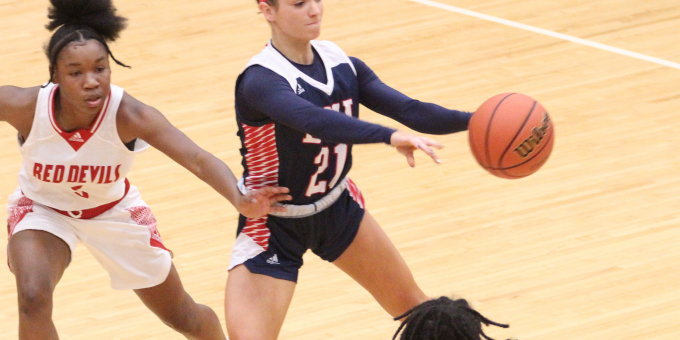 BEDFORD – The newest soap opera – As the Ankle Turns – has captured the attention of everyone involved in Sectional 15.

The status of Karsyn Norman’s sprained left ankle, a tense cliffhanger at the conclusion of Tuesday night’s opening round, will determine the storyline as No.3 Bedford North Lawrence continues its quest for an 11th consecutive Class 4A sectional championship. The Stars already escaped a potential showstopper, now they face a semifinal clash with Floyd Central with a potential hole in the lineup.

As a projected winter storm continues to assault the state, no team is hoping for a postponement more than BNL. The longer Norman can rest the injury, the better her chances of returning for the next round. That decision – both for Norman and the fate of Friday’s scheduled semifinals – is day to day. Aren’t we all?

BNL (21-2) will eventually clash with Floyd Central (9-13) in the second semifinal, with Seymour (11-10) set for a rematch with Jennings County (16-6) in the first. Those winners will collide for the championship, and a berth in the regional at Columbus North. The status of the semifinals (play or postpone) will be announced on Friday at noon.

Norman was carried off the court early in the fourth quarter during the win over Jeffersonville. She returned minutes later, with a noticeable limp, and finished out the 51-42 triumph over the Red Devils. BNL coach Jeff Allen is preparing for two contingencies – expecting her to play, adjusting if she doesn’t.

“It’s going to be day to day,” Allen said. “It’s not as bad as we thought, it’s still sprained. Right now we plan on her being ready to go. So the snow is probably a good thing for her.”

Norman’s impact cannot be overstated. She’s second on the Stars in scoring (14.6), first in assists (3.1), first in steals (3.3), first in defensive assignments against the opposition’s best perimeter player, first in vocal leadership. As she goes, so goes BNL. She’s also one of the best point guards in the state, a potential Junior All-Star, and a Div. I recruiting target.

But does BNL have the firepower to still handle the Highlanders? Certainly. Sophomore star Chloe Spreen (16.2 points, 6.1 rebounds) leads the Stars in scoring and rebounding, sophomore Mallory Pride (6.6 points) stepped into the spotlight in the win over Jeffersonville with 12 points, Madisyn Bailey (7.3) had two huge steals during that comeback, and senior Carlee Kern (6.0) has been big in key moments. If Norman is sidelined, they’ll just be asked to do a little more.

Allen expects the best but already has plans for the worst, whether it’s a boot or sneaker for his floor general.

“Karsyn does a lot for us on both ends of the floor,” Allen said. “So it puts primary ballhandling responsibility on Madisyn, makes us a little bit larger inside (with senior Ella Turner in the post) where we can’t pressure people so much out there. But we’ll adapt and adjust. We can match up with them.”

BNL had little trouble with Floyd Central during the regular season, rolling to a 62-28 win on Jan. 15 at BNL Fieldhouse. Spreen had 18 points and 13 rebounds, while Norman totaled 17 points. Keegan Kaiser led the Highlanders with 13 that night. Floyd had 20 turnovers and shot only 33 percent.

Floyd does have momentum. The Highlanders have won two straight, most notably an impressive 55-50 win over Jennings County. They also pushed 3A No.12 Corydon to overtime. So they are peaking for the tournament and will demand BNL’s complete attention, especially after the Stars showed their vulnerability and were forced to rally from a seven-point deficit in the second half during the first-game struggles against the Red Devils.

“That’s why I like playing on Tuesday,” Allen said. “A little bit of nerves. If you wait and play that game on Friday, against a team that’s already played, you might not pull that game out. But our schedule, in terms of preparation, we were down against North Central, down against Warren Central, we’ve been in tough spots. And we came back. That helps you prepare for that situation. It’s sectional time and you have to be prepared for anything.”

Seymour vs. Jennings County – The Owls will be looking to reverse a 70-42 loss during the regular season when they face the Panthers. Jennings will feature star center Juliann Woodard (11 points and 17 rebounds in the first meeting on Dec. 7) and sophomore guard Alivia Elmore (15 points).

“It’s going to be tough,” Seymour coach Jason Longmeier said. “They’re solid. We think we have some matchups to get some things done. But they always play us well. We’ll have to come out with a good game.”

Seymour is coming off a solid 59-47 victory over New Albany in the sectional opener, with four scorers hitting double figures. Grace Schrader and Brooke Trinkle both had 15 points against the Bulldogs, while Kendall Sterling and Journee Brown added 10 each. Sterling totaled 15 points and Schrader had 13 in the first clash with the Panthers.

Jennings has had a rough landing for the postseason, suffering recent losses to Columbus East (81-75 in overtime) and 82-57 to No.2 Franklin (in addition to the setback against the Highlanders).

The sectional champion will face the Evansville winner in the first round of the two-game regional on Feb. 12.

Semifinal round at Jeffersonville

Last meeting: On Jan. 15 at BNL, the Stars thumped the Highlanders 62-28. Chloe Spreen had 18 points and 13 rebounds while Karsyn Norman added 13 points. Keegan Kaiser had 13 points for Floyd.

Game notes: BNL has won 31 consecutive sectional games. Floyd Central has not won a sectional game since 2013 and won its last title in 2010. This is the first postseason meeting between the teams since 2016.

Game notes: Jennings has won three straight games in the series. The Panthers haven’t won a sectional title since 2005, while Seymour’s last championship came in 2008. The Owls haven’t reached the sectional final since 2010.