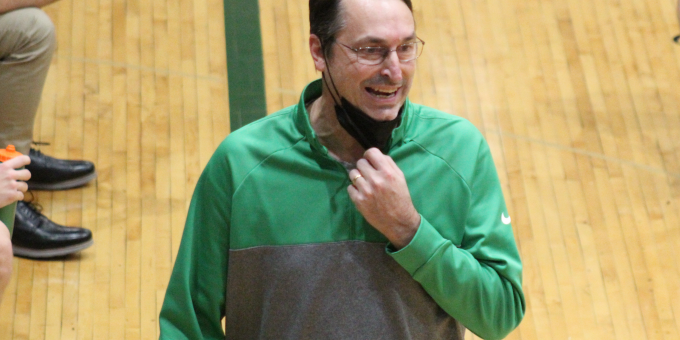 BEDFORD – Acrophobia is the fear of heights. Bedford North Lawrence will be tested for that debilitating condition when the Stars face super-sized, vertically-overloaded Floyd Central.

With a 7-footer in the middle, with a lineup that could rival a college squad in terms of overall length, the Highlanders present a giant obstacle for the low-altitude Stars to cut down to size. Either that, or get a King Kong gate to keep Floyd out of BNL Fieldhouse.

BNL will look to counter the sheer size of the Highlanders with the size of the fight in its dogged determination when the Hoosier Hills Conference rivals clash on Wednesday night. With a strong winter storm in the forecast, the game was moved up 24 hours. Now if the Stars could only grow during that span.

“They have length, they have shooters, they have the 7-foot kid inside,” Hein said. “ It presents a challenge. They have about everything they need.”

Floyd’s strength this season, as it bears down on the HHC championship, has been depth and balance. FC coach Todd Sturgeon can go eight deep in his veteran rotation, and pinpointing his top scoring threat has been difficult. That makes the Highlanders doubly dangerous.

“It’s been a different guy every night,” Sturgeon said. “That’s something I’m not used to. We’ve always ran things through one guy, but this team isn’t like that. There are a lot of moving parts. Hopefully we can keep the magic going.”

BNL doesn’t have that kind of wingspan, so the Stars will counter with guards Colten Leach (13.5 points) and Colton Staggs (12.0) and look to slow down FC with patience and penetration.

Floyd won last year’s game 61-38, although that final was misleading. BNL trailed only 37-35 with 1:57 left in the third quarter. But from that point, the Stars failed to convert a field goal the rest of the way. Jake Heidbreder had 16 points and point guard Kyle Poates was a spark off the bench with 10.

BNL hasn’t played since the win over Edgewood on Jan. 22, missing two games last weekend. The Stars face nine games in February, including six in a 11-day stretch in the middle of the month.

“Our schedule is going to start looking like an NBA schedule from here out,” Hein said. “The nice thing is, you get to February, you just want to play. The kids are tired of practicing. So we’ll get the opportunity to play our way to the tournament. At this point in the year, you don’t need a lot of time to prepare for opponents. You shore up things on your end.”

BNL’s game at Jeffersonville, originally set for Jan. 28, has been reset for Feb. 10.

Last meeting: Last year at Floyd Central, the Highlanders pulled away for a 61-38 victory. Jake Heidbreder had 16 points for Floyd, while Kooper Staley totaled 16 for the Stars. BNL went the final 9:57 without a field goal.

Game notes: Floyd Central can clinch at least a share of the HHC title with a win. The Highlanders shared the championship with New Albany and Jeffersonville last season. Floyd Central is ranked No.12 in the latest IBCA state poll, which does not divide by class.