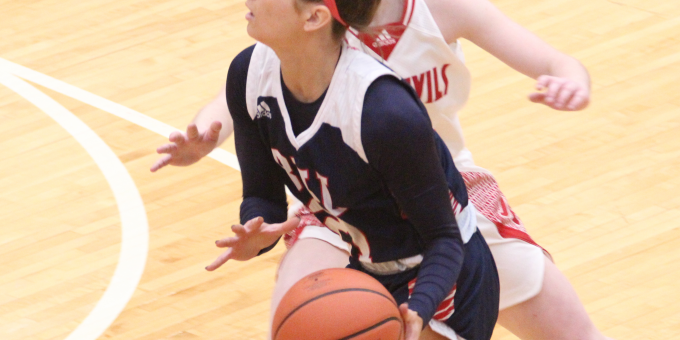 JEFFERSONVILLE – Visions of upset plums were dancing in Jeffersonville’s head. There’s no question a streak-shattering victory over the 10-time defending sectional champion, the No.3 team in Indiana, would have resonated across the state and throughout history. Jeff coach Missy Voyles, in retrospect after the stunning battle, could almost see herself in the mic-drop moment, walking away to never coach again.

Somehow, in the ultimate example of surviving and advancing, Bedford North Lawrence limped away to fight another day. With the upset alerts flashing across Hoosierland at the speed of a social-media click, the Stars got off the canvas to fend off the Red Devils.

Trailing by seven points in the second half, with star point guard Karsyn Norman hobbled and struggling, BNL displayed true grit while rallying for a 51-42 triumph in the opening round of the Class 4A sectional at Jeffersonville on Tuesday night. Norman had 14 points and Chloe Spreen had 13 as BNL extended its amazing sectional streak to 31 straight wins while moving forward to face Floyd Central in the semifinal on Friday night.

In the opener, Seymour stopped New Albany 59-47 and will clash with Jennings County in the first semifinal. The championship, barring any weather postponements, is currently set for Saturday night.

With Johnson Arena in an uproar, the Red Devils (10-8) had the Stars on the ropes. But like a fighter, bloodied and in trouble, the Stars wobbled back to the center of the ring and found a will, and a way, to win on points. The knockout blows were never landed, and Jeffersonville had plenty of chances to take down the champ. Oh, what might have been.

“It’s always easy winning sectional games,” BNL coach Jeff Allen said, with the best of sarcasm and eye rolls. “You know what? It’s a battle. Sectional games can be hard.”

And this certainly was. From the first bell, the Devils were the aggressors, attacking the paint, jumping in passing lanes, catching the Stars with their guard down. Proverbial black eyes attested to that. When BNL stumbled through the second quarter, hitting a morbid 3 of 17 shots, the Devils had a 29-23 halftime lead and the belief of a possible win for the ages. When they surged to a 35-28 advantage late in the third, BNL had that glass-eyed look. One more punch, down goes Frazier.

Turning points aren’t usually easily identified, but this one was glaring. The Devils had a 3-on-1 fast break, about to go back up by six points in the final minute of the quarter. But sneaky and quiet BNL sophomore Madisyn Bailey, the lone defender, made a brilliant steal and hit Norman for a layup. Spreen made two free throws for a 35-35 deadlock.

And after Jeff’s Brooklyn Carter hit a trey for a 38-37 lead, BNL went on a 10-0 run, despite Norman’s left-ankle injury that caused some major breath holding. Bailey went coast-to-coast with a rebound, Carlee Kern hit a huge corner 3-pointer, Mallory Pride gashed the lane for a layup, and Spreen made two free throws with 3:18 left.

That was close. Too close. Credit the Devils for a near-perfect game plan. Zone ‘em, drive ‘em, stand up to ‘em. Hit ‘em and see if they can take a punch.

“Jeffersonville played inspired, they played well,” Allen said. “They were physical with us, and it really affected our play. I challenged the girls. Basically it came down to we had to fight, and how bad do we want it? We responded in the second half and really gutted it out.

“Sometimes you have to do that in the tournament. We struggled in certain phases, but that team would have beaten a lot of teams tonight.”

While crediting BNL’s championship resolve and experience under fire, Jeffersonville coach Missy Voyles was displeased by the 12-4 foul difference in the second half. The Stars didn’t take advantage of that, making only 11 of 25 free throws.

“That was a little hard to take. It was a little rougher on one end than the other,” Voyles said. And then she noted the obvious – the Stars made plays at crucial times. “They have great players, When it came down to it, they made great plays. They hit shots when they neeed to hit shots. Kern stepped up and hit a three, Pride hit a big shot late in the second half. They were doing what a No.3 team in the state should do.”

Pride finished with 12 points, hitting three treys. Bailey had four points, but her steal was crucial. “That was kind of a dagger,” Voyles said.

Elle Marble had 10 points, La’Kyra Johnson added 9, and Cadence Singleton totaled 8 for the Devils. BNL, usually so tough on the defensive end, gave up too many points in the paint but surrendered only 13 points in the second half. Jeff’s zone caused some angst as BNL was brutal from the field (17 of 51) and that carried over to the foul line.

”They were confused when we started five guards,” Voyles said. “We were aggressive going to the rim, we were kicking and creating good shots, scoring points in the paint. If you’re playing a team that good, you have to do something they don’t expect.”

“For some reason it made us nervous,” Allen said. “They had a lot of energy, they were very athletic, they came to play. And it caught my kids by surprise a little bit. They got a little tentative. And I didn’t like the way we were guarding, we weren’t as disciplined as we normally are. Sometimes a little panic will make that happen.”

The question now will be Norman’s left ankle. After she was carried to the locker room with 6:09 left, she came back out at 3:54. Then she hit the deck hard on a drive and clutched her head, missing more minutes. If the Stars do indeed win their 11th straight sectional, they’ll need her a full speed. But right now they’re just relieved to take the first step toward that goal.

“It’s a good win,” Allen said as his team improved to 21-2. “Sectional teams come to play. Those kids didn’t want to go home tonight. They showed it. They left everything on the floor. I’m proud of my kids for how they stood up and fought back. There will be games where it won’t be pretty.

“Somebody backs you in a corner and pounds on you, someitmes you have to go toe to toe once in a while. You can’t always dance around, you have to get down and dirty.”

Seymour 59, New Albany 47 – The Owls (11-10) went on an 11-0 run to start the second quarter and cruised to their second win over the Bulldogs in the last five days. Grace Schrader and Brooke Trinkle paced a balanced Seymour offense with 15 points each.

Kendall Sterling and Journee Brown added 10 points each for Seymour, which won its first postseason game since 2012.

”That’s key for us,” Seymour coach Jason Longmeier said about the four scorers in double figures. “Our problem when we’ve struggled has been turnovers. Right now we’re as together as we’ve been all year.”

Maleea Roland and Taylor Treat had 12 points each, and Kaylee DeMuth came off the bench to hit three treys and total 11 points for the Bulldogs (5-18). New Albany also suffered a 48-46 loss to the Owls on Jan. 27.

“We defended Treat better this time,” Longmeier said. “Even though she got some, she had to earn everything. We forced the ball out of her hands more than other teams have. That discombobulated their offense.”

Seymour advanced to the semifinal to face Jennings County. The Panthers conquered the Owls 70-42 on Dec. 7.