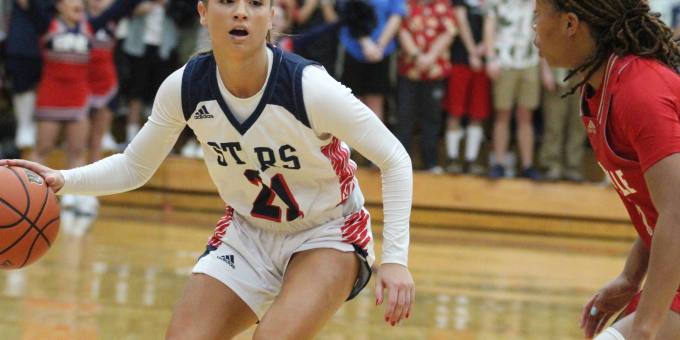 BEDFORD – Of all the program highlights, including four state championship banners and two Miss Basketball winners, ‘The Streak’ ranks among the great achievements in Bedford North Lawrence history. Winning a sectional title is difficult, cutting down the nets 10 consecutive seasons defies odds and description.

There have been extreme scares during those 30 straight wins. A one-point escape against Jennings County in 2016, the epic double-overtime battle with Jeffersonville in 2018 that is arguably the best ever, last year’s title clash with Jennings County when BNL had to rally from a 12-point deficit.

Keys to ‘The Streak’? Luck? Perhaps. Talent? Definitely. But that only explains part of it. There’s a heartbeat, a pride, an expectation of excellence that has given the Stars an aura of invincibility. They will start the celestial chase for another one – call it Heaven is Eleven – on Tuesday night.

No.4 BNL (20-2) will be the obvious and overwhelming favorite when it faces Jeffersonville (10-7) in the second game of the opening round at Jeffersonville. Seymour (10-10) will meet New Albany (5-18) in a quick-turnaround rematch in the opening game.

Floyd Central (9-13) will await the BNL-Jeffersonville winner in the second semifinal on Friday, while Jennings County (16-6) drew a bye to face the Seymour-New Albany survivor in the first semifinal. The championship is set for Saturday.

“I don’t know anything is tougher than winning a sectional, not only back-to-back but 10 times in a row,” BNL coach Jeff Allen said. “It’s a testament to how we do things here, what we’ve done as far as instilling in our players the desire and understanding to win.

“We’ve had several close games, thinking back to the Jeffersonville game where I thought we were beat about three different times. Every coach will tell you there’s a little luck involved. Preparation is big, not just the week of but the whole year, talking about situations and getting your kids ready for a tournament setting and being prepared for whatever someone throws at you. When you have success, kids expect to win. In close games, it’s not so much coaching as it is a kid’s desire to win and make a play, having the confidence to win.”

The Stars should certainly be confident. They already own a regular-season win over the Red Devils, posting a 53-31 home victory on Nov. 20. BNL wasn’t crisp that night, shooting only 38 percent and giving up 18 turnovers. Chloe Spreen had 19 points, Mallory Pride added 14, and BNL forced 26 Jeff turnovers to compensate for its offensive malaise.

“We turned the ball over a lot,” Allen said. “Maybe you can credit the hangover from North Central (a key 54-51 road victory that many point to as the springboard for this season) the night before, some of it is credit to Jeffersonville’s athletes. And some of it was making bad decisions. So we need to take care of the basketball, value possessions.”

The Red Devils have played only four games since Dec. 14, thanks to virus postponements. They’ve won three straight for momentum, capped by a 54-46 win over Scottsburg. Nevaeh Bates had 11 points and Brooklyn Carter came off the bench for 10 to spark that triumph. La’Kyra Johnson had 10 points and Sophia Reese totaled 8 in the first clash with BNL.

BNL concluded the regular season with a four-game winning streak. The postseason one matters much more, especially when the target is part of the jersey.

“We’re always get everyone’s best game,” Spreen said. “Everyone is out to get us. We have our winning streak and everything. So it’s a big deal for us. We’ve worked so hard for this. And it’s here already. Every team we play, we’ll get the best. We have to play our game, play hard, make shots, make good decisions, value possessions.”

“Everyone’s head has to be in it,” Norman said.

BNL, which owns an eight-game postseason winning streak against Jeffersonville, will rely on its defense first (allowing only 36.8 points), and look to set the tone with a fast start. That’s been a recent point of emphasis.

“Just a good start, where we play with intensity, where we fell good about ourselves offensively,” Allen said. “I really like playing on Tuesday. Sitting around and practicing all week is stressful. The kids sit around and get nervous. I’m not thrilled about playing Jeffersonville in the opening game on their home floor, but we’ll be prepared for anything.”

New Albany vs. Seymour – In the opener, the Owls will be looking for a second straight win over the Bulldogs. Seymour just clipped New Albany 48-46 on Jan. 27 to cap the regular season. Journee Brown hit the game winner at the buzzer, Grace Schrader paced the Owls in scoring with 15 points while Kaylee Waskom scored 11.

First round at Jeffersonville

Last meeting: On Nov. 20 at BNL, the Stars cruised to a 53-31 victory. Chloe Spreen had 19 points and Mallory Pride added 14 for BNL. La’Kyra Johnson had 10 points for the Devils.

Last meeting: On Jan. 27 At New Albany, Seymour prevailed 48-46 on a last-second shot by Journee Brown. Grace Schrader paced the Owls in scoring with 15 points while Kaylee Waskom scored 11.