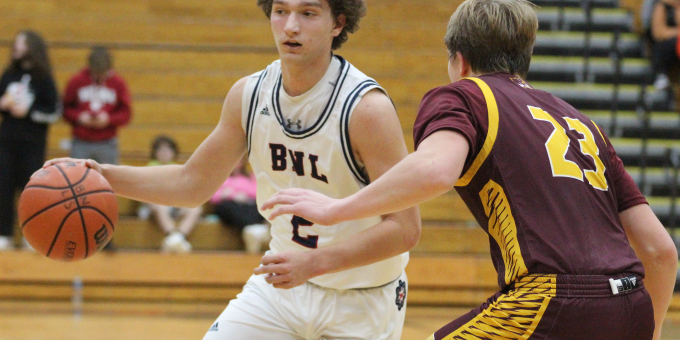 BEDFORD – Vengeance was his, he would repay, saith Colten Leach. Maybe Bloomington North’s army was too much, and Bedford North Lawrence’s junior Avenger couldn’t protect his team from a season-opening loss, but he could avenge it.

Revenge was served, and it was sweet, as Leach powered the Stars to a climactic triumph over the Cougars in the championship game of the Danny Bush Classic on Tuesday night. BNL flipped the script on that earlier loss in enemy territory with a 48-40 victory that earned a title and raised some eyebrows.

Leach scored 20 points, the bulk of that in the second half when he imposed his iron will as BNL (4-4) ended North’s four-game winning streak in the series with another impressive win. The Stars reversed that 66-47 loss from late November’s debut with a victory that will ring in the new year.

What changed? Several things. Most notably the main characters. North was missing senior scoring leader Nick Klaiber, who was hobbling on crutches after suffering a hamstring injury last week and will likely be sidelined a month. So BNL coach Jeff Hein was quick to point out this win might need an asterisk beside it. If so, then BNL’s first loss deserves a side note as well, with Leach watching that one in sweats and sandals as he finished his surgery rehab on his bionic knee.

With Indiana University coach Mike Woodson in attendance to check out North star J.Q. Roberts, Leach was the star. ”I think he felt Woodson was here to see him,” Hein said with a laugh. He certainly played like it, particularly in the second half as he scored BNL’s first eight points, setting the tone for a closed-fist, fight-back toughness win.

“It was amazing, to come back and get revenge,” Leach said. “We couldn’t beat them the first time, we didn’t have enough. But now we’re more balanced and playing well, on a streak.”

BNL earned this one by dictating tempo, by forcing the impatient Cougars to slow to its pace, by turning the 6-7 Roberts – a dunking machine in the tournament semifinal win over Whiteland – into a perimeter jump shooter. Roberts was limited to 10 points, his only field goals were treys. Hein gave credit to BNL’s Jett Jones, a center in the Brad Noel mold (a 1989 reference) with a vertical measured in paper sheets rather than inches.

“What about Jett Jones? What a game that kid had again,” Hein said. “J.Q. probably doesn’t want to see him again”

The Stars trended early and went viral in the second half. The first key was getting in front, and they did that with two Trace Rynders bombs, a Leach 3-point play, and a Colton Staggs drive for a 12-6 edge at the first break. Kole Bailey, playing another pivotal role off the bench, added a layup (off a Leach pass) and a 12-footer in the lane as BNL went to halftime with a 19-16 edge and the advantage in time of possession.

Then Leach took over. He stopped and popped from 12 feet. He countered again from the paint, he challenged defenders inside and collected a blocked shot for a quick outback. Kaedyn Bennett buried a trey, Jones started the fourth quarter with a corner bomb, and BNL’s lead was double digits.

North shifted into desperate scramble mode, and BNL beat pressure for breakaway layups by Bailey and Jones. And that was enough.

“It was another great team win by five guys that were willing to do what it takes to win,” said Hein, who did not substitute in the second half after finding a combination that clicked. No need to fix what wasn’t broken. “It’s not always the most talented team that wins, but it’s the team that plays together. That group was working. Kole did a great job, he’s earned those minutes.“

Leach had 14 points after intermission, and he grabbed 8 rebounds as BNL outmuscled the Cougars 32-24 on the glass. Bennett added 7 boards, and the Stars answered the toughness test. Bailey added 8 points.

“We ended up chasing for three quarters,” North coach Jason Speer said. “We didn’t get off to a good start, we got into the mindset of chase, chase, chase. That’s exactly what posession-oriented teams want you to do. You’re not going to catch the rabbit in that case.

“This is not a surprise. They’re a very solid team. We left a lot of points out there that could have flipped the script a little bit, but that’s basketball.“

“Our kids played hard,” Hein said. “Giving up 40 points to that team is something. We were getting every loose ball. If I had a game ball, I’d give it to Jett. Although Leach would be a close second. I made a Christmas wish list for BNL basketball, and his was to shoot the pull-up. He hit a couple of big ones, that’s what we need him to do.”

Perhaps an asterisk could be placed alongside every BNL loss (three without Leach, and the controversial ending at Madison). But that’s a what-if game with no winner. The reality is how well the Stars defend, how tough they’ve become. They have a collective short man’s syndrome, playing aggressively to make up for a lack of size.

“Our defense really gets people going,” Leach said. “We can get anything we want on the offensive end, driving to the basket and kicking to others. If we get up, the game is in our hands.”

And then he smiled, revealing a face with some puffy redness that might even turn into bruises. He doesn’t care.

“We came right back at them,” he said.

Whiteland 80, Owen Valley 45 – In the consolation game, the Warriors exploded for eight 3-pointers in the second quarter while blowing out to a 42-19 halftime advantage.

Austin Willoughby erupted for 38 points to lead the Warriors, while Dylan Gross went nuclear with five treys in the second quarter to total his 15 points. Cayden Pauquette had 14 points for the Patriots (3-4).