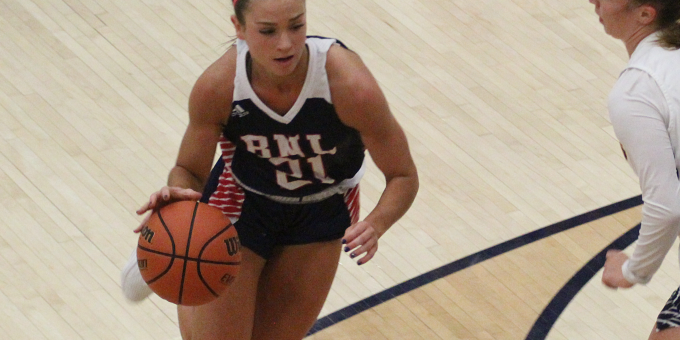 MOORESVILLE – Of all the viper pits in Indiana, Mooresville ranks among the toughest to conquer. Any victory there should be cherished, no matter how dysfunctional it looks. Style points are irrelevant.

So when Bedford North Lawrence limped off the court, drained and bruised but victorious on Friday night, there were multiple and huge sighs of relief. What could have gone so wrong ended so right as the No.4 Stars won their season opener on the road. And they certainly earned it.

BNL took control with a dogmatic 19-0 run in the first half, then survived a dog-eat-dog finish while solving the tough basketball version of an escape room with a 47-44 win over the Pioneers. Karsyn Norman scored 21 points, Chloe Spreen fought off a physical defensive swarm to total 13, and the Stars withstood a Mooresville charge in the second half.

The best BNL moments were in the first half, when a nervous 7-2 deficit was flipped red to a 21-7 lead. The Stars got to halftime with a 30-16 advantage, then had to fend off the Pioneers during some second-half withering under the pressure. Mooresville (1-1) did not go easily or quietly and cut the margin to a single possession twice in the fourth quarter.

Norman, with the Stars clinging to a 43-40 lead, was a late hero with a daring drive for a left-handed basket and a supreme hustle steal for a layup with 2:25 left. She missed two one-and-one free throws in the closing 15 seconds, but Spreen bailed out BNL with an offensive rebound, not allowing Mooresville to launch a potential tying bomb.

“A big sigh of relief,” said Norman, beating herself up for the misses and momentarily forgetting about all the great things she did before that. “I think I got a little too comfortable, forgot where we were. You can’t do that. They put up a big fight.”

Don’t ever forget the surroundings. Mooresville, which had opened with a win over Northview earlier in the week, was sharp early for the 7-2 lead. But that changed when the Stars buckled down defensively. Madisyn Bailey swished a trey, Norman banged home another and closed the first quarter with a bucket for a 12-7 lead.

The Stars kept the surge going, roaring to a 21-7 edge before Mooresville’s Rachel Harshman scored from the paint at the 4:57 mark. That ended a 7:15 drought, but the Pioneers were in trouble.

”They had a game under their belt, and we were nervous,” BNL coach Jeff Allen said. “You could tell that right away. But we came out of that pretty well. Our defense got us out of that. Our defense was outstanding in the first half.”

Mooresville calmed its angst, but Spreen’s steal set up Norman’s quick pass to Bailey for a 3-pointer at the halftime buzzer and the 14-point edge. BNL had a chance to pull away with quality minutes to start the second half, but Mooresville’s Maddy Denny scored the first three baskets to send a message. The rest of the way was a slugfest.

“We wanted to get more separation, and they put it to us,” Allen said. “We got a little gassed. We made some rushed, panicked decisions. We haven’t been in that situation, so it’s going to be trial by fire. That’s part of learning. They’ll learn quickly.”

When the Stars were reeling, Norman came through. She ripped to a back-cut layup for a 38-30 lead, found Bailey for another trey, and Spreen muscled in her own miss for a 43-33 advantage. When the Stars struggled in the fourth, it was her two baskets that settled everyone and kept the Pioneers in scramble mode.

“I used to be the point to get the ball to the scorer,” Norman said. “Now it’s my role. I need to be a little more clutch.”

Spreen, who will probably find a few bruises in coming days, was only 3 of 13 from the field. But she added 8 rebounds, none bigger than the last one. Norman’s missed the one-and-one with 7 seconds left, but Spreen rescued it. As she fended off defenders in the lane, hoping to draw contact, she was finally called for a three-second violation. But only one-tenth of a second remained on the clock, not enough time to catch and shoot.

“Spreen and Norman can get to the basket about any time they want,” Mooresville coach Mark Hurt said. “That hurt us. You have to give Norman credit. She’s a really good offensive player.

“We have a hard time scoring. That’s a problem. We have to find a way to put the ball in the basket. You have to credit Bedford for putting pressure on our guards.”

Denny finished with 15 points (14 in the second half) while Harshman added 12 points and 10 rebounds. The Pioneers just couldn’t dig out of the hole created by BNL’s 19-0 burst.

“Bedford is built on defense,” Hurt said. “We were concerned how we would get points. When the ball goes in the basket, we look pretty good. But when you get outscored 19-0, we didn’t look good in that stretch.”

“We’ve come up here with really good teams and barely won or gotten beat,” Allen said. “So I’m happy to get out of here. They have lot of pride. That team will win a lot of games.”

BNL will go back on the road on Tuesday to visit Bloomington North.