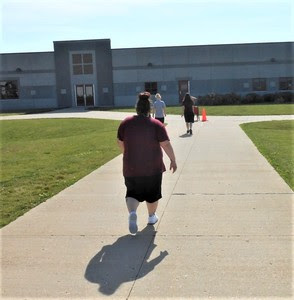 The RCF Incarcerated Veterans group are nine U.S. military veteran women who have run afoul of the law but are now using their military training as one of many building blocks in rebuilding their lives.  The RCF chapter is organized by Transition Coordinator, Kristen Selvia-Butler and is part of the national Incarcerated Veterans Program (IVP). The IVP provides veterans with opportunities, services, and information relating to their military service, and the benefits they may be eligible for from the U.S. Department of Veteran Affairs (VA) upon their release from incarceration.  The program also encourages those eligible to come together and participate in activities to cultivate a sense of camaraderie and positive fellowship.

The Incarcerated Veterans group meets periodically for fun, educational activities, and to encourage their military unity. RCF’s Facility Veterans’ Coordinator Kristen Selvia-Butler said, “It is good to have this group of veterans back together again after the long pandemic separation. With it being an outside activity, we were able to meet while maintaining social distancing. And PTSD awareness is so relevant not only for our veterans but also for many of our population.”

The National Center for PTSD is a VA initiative that has come to be recognized as the world’s leading research and educational center for subject matter excellence.  They describe PTSD as a mental health problem that some people develop after experiencing or witnessing a life-threatening event such as combat, natural disasters, car accidents, or sexual assault.

PTSD is believed to be present in approximately 3.5 percent of the U.S. population on whole.  These numbers significantly increase with estimates of 17 percent of military veterans and 53 percent of incarcerated women suffering with PTSD.

Women Veterans Recognition Day commemorates the passing of the Women’s Armed Services Integration Act in 1948. The act granted women the right to serve as permanent, regular members of the Army, Navy, Marine Corps, and the Air Force.

For veterans and civilians – if you, or someone you know, are struggling with PTSD the National Center for PTSD can help – http://www.ptsd.va.gov.