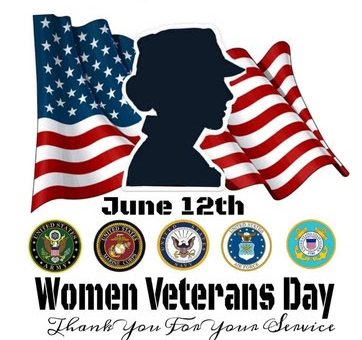 UNDATED – Women Veterans Day is observed on Saturday, June 12 in the United States, a date chosen to mark the anniversary of the Women’s Armed Services Integration Act. The date is not recognized nationally, but is recognized by a number of states, either through legislation or proclamation, and organizations.

The day acknowledged and honored the work of women in the United States Armed Forces and recognized the unique challenges that they have faced.

The date was first recognized when the New York State Assembly declared June 12, 2008 to be Women Veterans’ Recognition Day.

Women struggled to formally serve their country in the American Revolutionary War. They were forbidden to serve, but did so against the law. The existence of women was even suppressed by General Washington himself.

Washington once stated, “…the multitude of women in particular, especially those who are pregnant, or have children, are a clog upon every movement. The Commander in Chief earnestly recommends it to the officers to use every reasonable method in their power to get rid of all such as are not absolutely necessary.”

However, as women followed the Army for shelter and other basic necessities they were equally important to the army, in traditional roles as nurses, seamstresses and cooks for troops in camp.

Though not in uniform, these women shared soldiers’ hardships, including inadequate housing and little compensation.

During the Civil War, women stepped into many nontraditional roles. Many women supported the war effort as nurses and aides, while others took a more upfront approach and secretly enlisted in the Army or served as spies and smugglers.

Thousands of women got caught up in the nation’s struggle between the North and South and assumed new responsibilities at home, and on the battlefield. Many took care of farms and families while encouraging and supporting the war effort, while others served Soldiers more directly as nurses, cooks, laundresses and clerks.

Although females were forbidden to join the military at the time, more than 400 women still served as secret Soldiers in the Civil War. It was relatively easy for them to pass through the recruiter’s station, since few questions were asked – as long as one looked the part. Women bound their breasts when necessary, padded the waists of their trousers, cut their hair short, and even adopted masculine names.

With the Spanish-American War came an epidemic of typhoid fever and a need for highly qualified Army nurses. The surgeon general requested and promptly received congressional authority on April 28, 1898.

Due to the exemplary performance of these Army contract nurses, the U.S. military realized that it would be helpful to have a corps of trained nurses, familiar with military ways, on call. This led the Army to establish a permanent Nurse Corps in 1901.

Between 1898 and 1901, more than 1,500 women nurses signed governmental contracts and served in the United States, Puerto Rico, the Philippine Islands, Hawaii, China, Japan and on the hospital ship Relief.

Upwards of 25,000 American women between the ages of 21 and 69 served overseas during World War I. They began going in August of 1914—at first singly or with a few companions, later with service organizations, and lastly at the request of the U.S. government. Although the largest number were nurses, women served in numerous other capacities – from administrators and secretaries to telephone operators and architects. Many women continued to serve long after Armistice Day, some returning home as late as 1923. Their efforts and contributions in the Great War left a lasting legacy that inspired change across the nation. The service of these women helped propel the passage of the 19th Amendment, June 4, 1919, guaranteeing women the right to vote.

The National Service School was organized by the Women’s Naval Service in 1916 to train women for duties in time of war and national disasters. The Army, Navy and the Marine Corps cooperated to train thousands of women for national service. Skills taught included: military calisthenics and drill, land telegraphy or telephone operating, manufacturing surgical dressings and bandages, signal work and many more.

Although the idea of women in the Army other than the Army Nurse Corps was not completely abandoned following World War I, it was not until the threat of world war loomed again that renewed interest was given to this issue. With the rumblings of World War II on the horizon, Congresswoman Edith Nourse Rogers of Massachusetts states, “I was resolved that our women would not again serve with the Army without the same protection the men got.” Consequently, the creation of the Women’s Army Corps was one of the most dramatic gender-changing events in American history.

Women stepped up to perform an array of critical Army jobs in order “to free a man to fight.” They worked in hundreds of fields such as military intelligence, cryptography, parachute rigging, maintenance and supply, to name a few. Additionally, more than 60,000 Army Nurses served around the world and more than 1,000 women flew aircraft for the Women’s Airforce Service Pilots.

The Vietnam War, the elimination of the draft, and the rise of the feminist movement had a major impact on both the Women’s Army Corps and Army Nurse Corps. There was a renewed emphasis on parity and increased opportunity for women in uniform.

In the largest call up of women since World War II, over 24,000 women served in the Persian Gulf War, beginning in 1990. During Operation Desert Shield/Desert Storm, the focus was on the mission more than the gender of the troops. With the call up of Reserves, which was filled with women, the Army utilized women to their fullest potential. After the conflict, military leaders acknowledged that excluding women from the mission would have impacted combat readiness.

Coming on the heels of Operation Desert Shield/Desert Storm, the Department of Defense continued its effort to respond to challenges with changing missions and the use of women. In July 1994, Secretary of Defense Les Aspin rescinded the 1988 Risk Rule and issued a new “Direct Ground Combat Definition and Assignment Rule,” directing that women were eligible to be assigned to all positions for which they qualified, except for units below brigade level whose primary mission is to engage the enemy in direct combat.

Between 1992 and 1999, the U.S. was called upon to respond to regional conflicts, natural disasters, and humanitarian crisis all over the world. In Somalia, Haiti, Bosnia and Kosovo, women were trained to cope with food riots, terrorist attacks, ethnic and clan conflicts, and peacekeeping. Their roles continued to be tested during these operations, although there seemed to be few questions about what women could or could not do and the value they added to the Army’s mission.