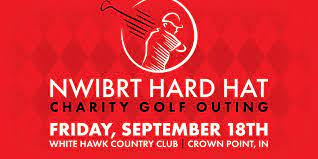 Part of the proceeds from the event will be donated to five regional charity organizations and the rest will be used to support safety initiatives and educational programming for NWI businesses.

Ryan Reithel from IBEW #697 and Tom Gozdecki from EMCOR Hyre Electric lead the committee as chairman and vice-chair.

“Everything about this group of people on our NWIBRT Hard Hat Golf committee is fantastic. We’re all from different companies, but we’re all here for the same reason. To raise money for some great causes,” said Reithel

Gozdecki added, “Ultimately, the safety training and education that we’re raising funds for will protect workers on the job. Maybe save lives. To add to that, we’ve chosen several fine charity groups that we’re proud to support.”

The five charities that will be receiving donations include Goodwill Industries of Michiana, Kids Chance of Indiana, Tradewinds Services, Challenger Learning Center of NWI, and the Boys and Girls Club of Greater NWI.

The outing is scheduled for September 17th at the White Hawk Country Club in Crown Point, IN.

About NWIBRT: The Northwest Indiana Business RoundTable (NWIBRT) is an independent, non-profit council of local firms committed to the improvement of construction and maintenance projects in Northwest Indiana.