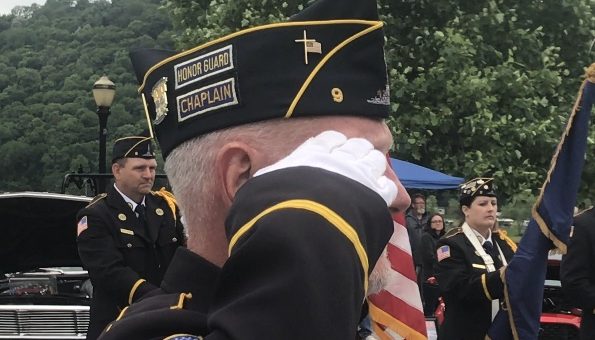 SOUTHERN INDIANA – This Memorial Day weekend looked a lot different than last year, as many gathered to celebrate the holiday. Public and private events were held throughout many cities and towns across the state this weekend.

Many did spend the weekend decorating graves of the fallen, visiting with and honoring those military men and women who served our country with a hand shake and telling them they appreciate their service.

On Friday and Saturday Riverfront Run Car Show and Cruise-In were held in Madison, Indiana bringing more than 100 cars, new and old, to the event.

The Ohio River town had many take advantage of the ” Spring Old Court Days” where local vendors brought arts, crafts, antiques, and collectibles around the Courthouse Square.

On Saturday ceremonies recognizing those who served were held. The events were opened with the playing of the National Anthem and TAPS followed by a 21-gun salute by local American Legion groups.

The City of Vincennes hosted the 35th Annual Rendezous celebration along the banks of the Wabash River.

Known as the Siege of Fort Vincennes (aka the Seige of Fort Sackville) was a battle fought in present-day Vincennes. It was won by the American Militia over a British Garrison. After a wintertime march, the American force was able to surrender the fort. The American forces were commanded by Lt. Col. George Rogers Clark which consisted of 17 militiamen. British Forces were commanded by Lt. Governor Henry Hamilton and consisted of about 200 Indians and 90 soldiers.

Many throughout the area hit the lakes, and rivers for a weekend of boating, skiing, fishing, and swimming.

Lake Monroe had many out on the waters to kick off the holiday weekend although it started out cool, with light rain dampening some of the fun.

However, by Monday the temperatures started to climb and the sun shined down making Memorial Day a better day for the festivities.

This weekend also turned out to be a good weekend for those fishing along White River. Amy and Gary Amstutz caught a 51-pound catfish and a 40-pound catfish.

“This has been a good weekend for those hitting the river for fishing bringing several down to fish along the banks as well as at along the Williams Dam,” said Amstutz.

Along with catfish being caught, many were able to reel in carp. It was reported that 4- to 5-pound carps were being reeled in.

Otis Park had a nice turnout of those wanting to hit the links on the golf course. This summer is expected to be a very good year for the park.

Others enjoyed the parks playing basketball, tennis, or just using the playground equipment.

One thing that was not open this weekend was the John Lowery Pool, which will open on June 4. This year, every city and Indiana State parks faced lifeguard shortages. Many were still able to dip in many places along the creeks, lakes, and rivers to cool off.

We honor those who have died in battle and served our country with many making the ultimate sacrifice for us. May we never forget what Memorial Day is really about.