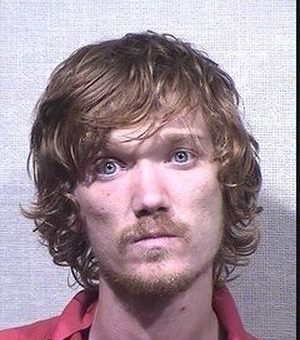 SEYMOUR – On Monday, at approximately 12:24 p.m. Seymour Police Department Communications received a call for assistance at Schneck Medical Center from hospital security after a prisoner escaped from a Jackson County Sheriff Department deputy.

Seymour Police officers and investigators responded to the location.

A Jackson County correctional officer was choked unconscious while guarding an inmate at Schneck Medical Center who was attempting to escape.

According to a news release from Seymour Police Department Lt. C.J. Foster, the assault on the correctional officer, whose name has not been released, occurred as 27-year-old Jackson Hatchett, of Brownstown, was being discharged from the hospital.

The correctional officer sustained multiple injuries and lost consciousness after being strangled by Hatchett.

After the assault, Hatchett barricaded himself in a bathroom before breaking out a third-story window. He then jumped out of that window, sustaining several lacerations to both arms, onto the roof of a second story. He then was able to enter a mechanical room accessible from the roof, police said.

Hatchett was caught after a Seymour officer working security at the hospital cornered him in the mechanical room until Seymour officers could arrive, Foster said.

Both the correctional officer and Hatchet were treated for their injuries and both have since been released.

No employees of Schneck Medical Center were injured in the incident.

Hatchett was arrested on Sunday on charges of possession of meth by Brownstown Police. It is unclear why he was at the hospital.