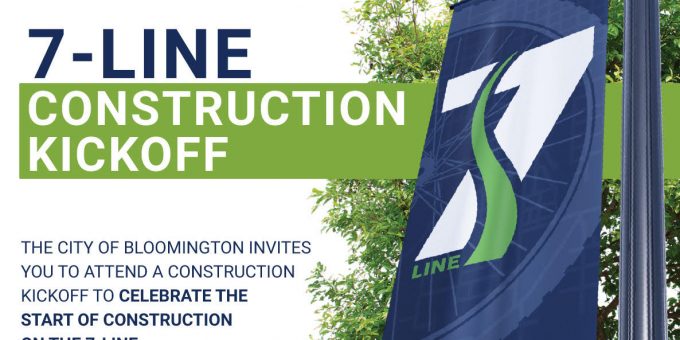 BLOOMINGTON – The City of Bloomington invites community members to a kickoff marking the start of construction of the 7-Line, a transformation of 7th Street providing a protected east-west bicycle lane, improved bus stops, and improved pedestrian features.

The multimodal corridor will connect the B-Line, downtown, the Indiana University campus, and neighborhoods on the city’s east and west sides while improving comfort, safety, and efficiency for all road users.

All those attending are asked to wear masks unless fully vaccinated and observe additional COVID-19 safety measures.

Building on the success and transformative effect of the B-Line Trail, the 7-Line is one of seven Bicentennial Bond projects proposed by Mayor John Hamilton and approved by Bloomington City Council in 2018.  Extending from the B-Line Trail to Woodlawn Avenue, the first phase of the 7th Street improvements extend 0.72 miles.  Milestone Contractors, LP was awarded the $2.6 million construction contract for the project, with construction scheduled to begin during the first week in June on the project’s eastern end.

During construction, the eastbound lane of 7th Street will be closed to traffic, with periodic closures of the westbound lane and some sidewalk closures.  All travel lanes and sidewalks east of Indiana Avenue will be reopened to traffic prior to August 9 to accommodate the return of the IU student population.  The City is coordinating with property owners and residents along the route to minimize impacts, and will share updates about street closures and changes to BT routes and schedules during construction, which is expected to continue throughout the year.