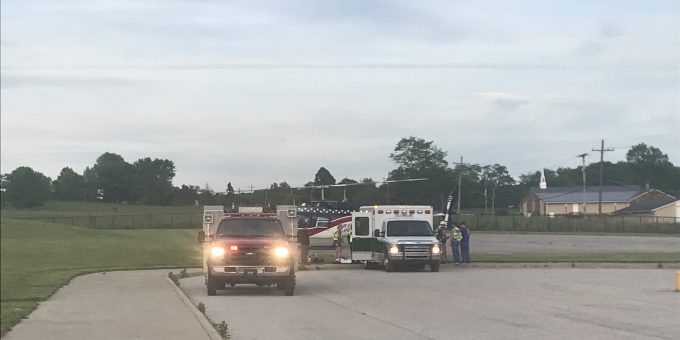 SPRINGVILLE – A Springville man was injured following a tractor accident in the 1500 block of Spencer Pike Road on private property Friday.

First responders from Bedford Fire Department, Marshall Township, and Perry Township Volunteer Fire Departments along with a Seals Ambulance crew was called to the location at 7:39 p.m. after a report of a man trapped under a tractor.

A neighbor, Mary Meyers from several houses down, heard 73-year-old Steven A. Kimmel, of Springville, screaming for help. It is unclear how long Kimmel might have been trapped under the tire of the tractor.

Kimmel was attempting to work on a bush hog that was attached to the tractor when it rolled on top of him trapping him.

Members of the Marshall Township Volunteer Fire Department were able to use airbags to lift the tractor off of Kimmel prior to the arrival of the Bedford Fire Department extrication team.

Perry Township firefighters secured a landing zone at Springville Elementary School for an Air Evac medical helicopter that transported Kimmel, who was seriously injured, to the University of Louisville Hospital.

Both Perry Township, Marshall Township and Seals Ambulance crews just were returning from a previous emergency call. An injured man in the 1800 block of Popcorn Road was transported by STAT Flight helicopter from an injury that occurred at his residence to Methodist Hospital in Indianapolis.