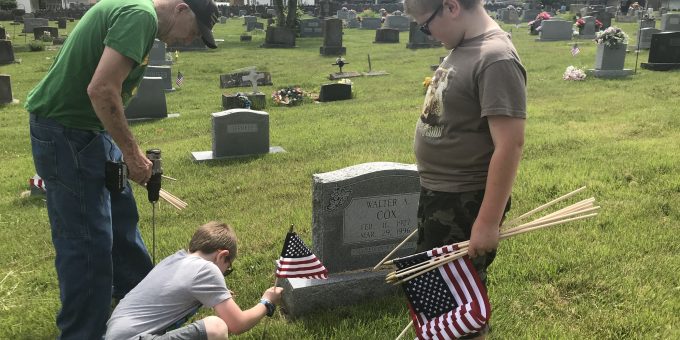 BEDFORD – On Saturday morning the Lawrence County Veterans Group, Springville Cub Scout Troop 343, and the Scallywags Motorcycle Club helped decorate the graves of those who served in the military.

Volunteers placed approximately 639 flags on military graves honoring those who served this country.

Many among those who are buried in Beech Grove were killed in action protecting the freedoms we now have.

Memorial Day is an American holiday, observed on the last Monday of May, honoring the men and women who died while serving in the U.S. Military. Memorial Day 2021 will occur on Monday, May 31.

Originally known as Decoration Day, it originated in the years following the Civil War and became an official federal holiday in 1971. Many Americans observe Memorial Day by visiting cemeteries or memorials, holding family gatherings and participating in parades. Unofficially, it marks the beginning of the summer season.

The Civil war, which ended in the spring of 1865, claimed more lives than any conflict in U.S. history and required the establishment of the country’s first national cemeteries.

By the late 1860s, Americans in various towns and cities began holding springtime tributes to these countless fallen soldiers, decorating their graves with flowers and reciting prayers.

“We look along these rows of graves and see these American flags, it such a wonderful feeling, I guess you can call it patriotism, to be able to place these flags and give honor to those who have served,” said Janet Lee whose husband Robert Lee served in World War II.

“I honor my husband Robert E. Lee, who was in Africa, Sicily, and Italy, he was an Army medic who served 3.5 to 4 years in World War II. The war was over for a while and there were so many boys wanting to come home. He was in Rome at that time and they had to wait their turn, and oh that was such a hard hard wait cause they knew they were going home once they got on that boat,” Lee added.

Robert and Janet were married just a couple of months shy of their 60th anniversary when he passed four years ago. Robert would have been 100 years old this year. After the war, Robert Lee was a school teacher in the North Lawrence School Corporation teaching history at the high school and serving as a coach for football, golf, and basketball.

“I am glad he served and this is just wonderful to honor the memory of him and those he served with,” said Janet who was also joined by her daughter Nancy Peabody.

Reid and Resse Ritter were some of the younger individuals who helped Saturday placing flags on the graves of those that served. The Ritters are cub scouts from Troop #343 from Springville.

“We want to thank them for the sacrifices these men and women made, they fought many battles.” said Reese Ritter.

“We want to honor our brothers every chance we get, we go to many cemeteries throughout the county,” said Tim Morrow of the Scallywags Motorcycle Group.

“We are free because of these individuals, freedom is not free, many had to sacrifice their lives,” said members of the group as they placed flags on the graves.

The city of Bedford donated a triangular plot in Beech Grove Cemetery to the Scott Harvey Chapter of the War Mothers for a memorial to local men who gave their lives in World War I.

The very first Memorial Day service to be held at the World War Memorial was on May 30, 1929.

Thirty-six Lawrence County residents gave the ultimate sacrifice during World War I. They are buried in cemeteries throughout the county, but were memorialized with stones called cenotaphs placed around the perimeter of the triangle at Beech Grove Cemetery.

On the morning of May 30, 1929, a hundred and twenty flags, each one representing a soldier who had died for his country in World War I, waved inside this triangle. Flowers were placed and there were speeches and a reading of the roster of local World War I soldiers by Mrs. Michael Wallner.

The local Veterans of Foreign Wars organization put up a flagpole in the center of the triangle in April 1930. Money for the flagpole was donated by some local businesses, including the Indiana Limestone Company and the Bedford Paint and Wallpaper Company, plus the city of Bedford. R.N. Tindal of Tindal’s Hardware furnished the rope to hoist the flag with.

Beech Grove Cemetery is one of many cemeteries who have a fascinating history of those who buried there.