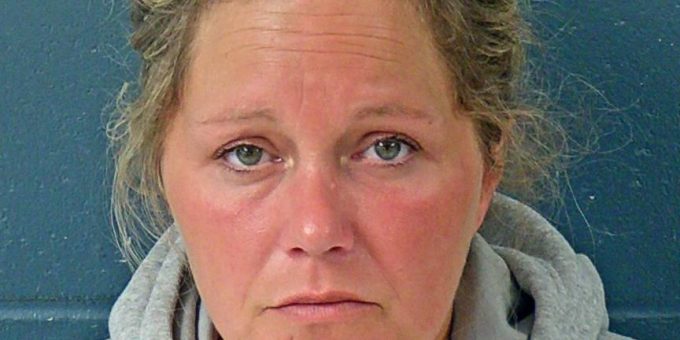 BEDFORD – A Mitchell woman was arrested on two counts of theft after stealing items from Walmart.

According to a probable cause affidavit, on March 14th and April 2, Bedford Police say 35-year-old Megan Terrell was captured on camera stealing items from Walmart.

Police were called to the store where Walmart officials provided officers with statements, photographs, and receipts from the two thefts.

An investigation began after an asset protection associate received information that a female customer was ticket switching and not paying for merchandise before leaving the store.

The items Terrell did pay for, she used a debit card.

Walmart officials told police that on March 14th, Terrell entered the store, shopped and made several selections. She took the merchandise to a self checkout register. While scanning items she was captured on camera using a dog dish tag while purchasing a dog bed. She then skipped scanned Swiffer pads and failed to scan toilet paper she left in her cart. She finished the transaction and left the store. The total amount paid for in this transaction was $23.19, including tax. The total  amount of theft in this case is $32.58, pre-tax.

Then on April 2, 2021, Terrell went shopping at Walmart and again went to the self check out register. She was caught on camera scanning a graphic t-shirt for other items in her cart including two beach towels and a bag. She also left the store without paying for a white laundry basket. The total amount paid for the transaction was $33.11, including  tax. The total amount of theft in this case is $52.29 pre-tax.

Police were able to positively identify the woman as Megan Terrell and went to her aunt’s home to speak to her, but Terrell was not there. An officer spoke to Terrell by phone on April 26.

Terrell denied ticket switching and said she had contacted Walmart to pay for the items that were not scanned. She said if she didn’t pay for any items, it was by accident. Police spoke to Walmart officials who wished to pursue charges.