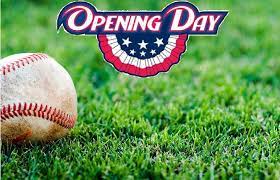 Opening ceremony will begin at Noon.

“We are always excited to offer baseball and softball to the youth of our community, and after putting most athletics on pause in 2020 due to the COVID-19 pandemic,” said Frank Decker, Chief Professional Officer. “We are extremely ecstatic to get baseball and softball seasons up and running. We have one of the nicest facilities in southern Indiana in Wiley Park.  Wiley was established in 2000 and has served our community well. I do not have enough words of gratitude for all the people that have contributed to the construction and upkeep of our facility, we are very fortunate to be able to host all age groups and genders at the same Location. Particularly now more than ever we need to offer our youth, physical and emotional wellbeing activities, and Wiley Park provides us that opportunity. I personally cannot wait to hear the words, – Play Ball.”

There will be two field dedications on Saturday.

“We will be renaming our T-Ball field to Elliott Field along with renaming our big field Hensley Field after the late Devon Hensley,” said Athletic Director Ben Barker.

Fifteen-year-old Devon Hensley was a familiar face at the Boys & Girls Club of Lawrence County. He had been an athlete for most of his life. He had a physical in November 2007 before the start of baseball season at Bedford North Lawrence High School. Devon was a freshman. Everything was normal and the doctor at the walk-in clinic cleared him to play.

On April 25, 2008, Devon went to practice after school and spent another hour playing catch with his brother. That night, around 2 a.m., his mother Ericka, who was sleeping nearby, awoke to find him shaking violently.

Chuck and Erika along with paramedics performed CPR, but Devon never woke up. He died that night, an autopsy later revealed his heart was near twice the size of a normal 15-year-old’s heart.

According to health officials, one out of every 200,000 high school-aged athletes dies every year, usually during high-intensity sports, such as football or basketball. As in Devon’s case, the most frequent cause of death is hypertrophic cardiomyopathy or HCM.

The condition is the most common genetic heart defect; about 500,000 Americans have it. Symptoms can include fainting, chest pain, and difficulty keeping up with other kids during physical activity. But most people are unaware that they have the disease. For some young athletes, the evidence of the condition comes too late as in Devon’s case.

HCM causes the heart muscle to thicken, which makes it harder for the organ to pump blood. Changes in the arrangement of heart muscle cells can also cause rhythm problems that lead to sudden death, usually without prior symptoms.

When her husband died in 2009, official control of the business was turned over to the couple’s four children, but Elliott remained a visible and active presence. Judy passed away on February 5, 2019, the day after her 87th birthday.

David was drafted into the U.S. Army during the Korean War and served in Germany.

David and Judy married on June 24, 1953 in Longview, TX. He owned Elliott Masonry Contracting, later becoming partner in Meredith Stone Company, fabricators of Indiana limestone. They together established Judy, Elliott Stone Co. Inc., quarriers and fabricators of Indiana limestone. They designed and patented a saw to develop an underground quarry.

In 1987 at Stone Expo in Atlanta, GA David was awarded the first annual Stone World Award, Technological Achievement Award as being the most innovative quarrier in North America. In 1988, Governor Robert Orr presented him with the Sagamore on the Wabash Honor.

The two had a strong belief in giving back to the community.

David served on the Bedford Park Board under three mayors: Clarence J. Hauck Jr., Lovell L. Harp and John A. Williams, serving as president several years. He helped to establish the Bedford Recreation Foundation during this time. He served on the Board of Directors of the Bedford Boys Club.

Judy served on the Board of Directors of the Bedford Chamber of Commerce.  She was on the Business Panel of the Becky Skillman Leadership Institute.  She had served as a board member of Dunn Memorial Hospital, Bedford North Lawrence School Board, Bedford Federal Savings Bank and a member of Psi Iota Xi.

Elliott Stone Company owned 1,000 acres of limestone-laced property in Lawrence and Monroe counties, specializing in the versatile Salem limestone that was used in the Washington National Cathedral, the Lincoln Memorial, the Empire State Building, Rockefeller Center, and the Tribune Tower.

The two worked together making the company into an industry leader. Her love for the limestone industry was evident to anyone fortunate enough to be on one of her famous quarry tours.