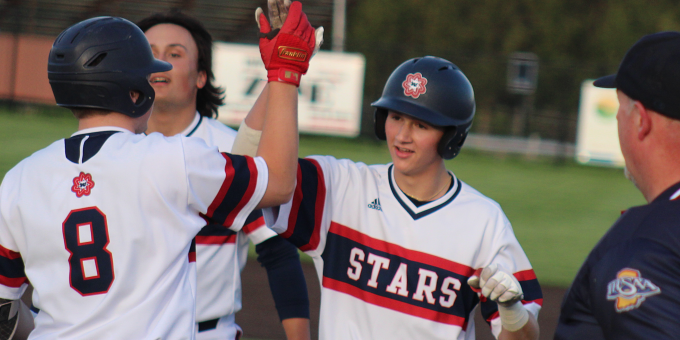 Of course, Dalton had never won a game on his last swing before. Next time, he’ll expect the dogpile on the infield.

With two outs in the bottom of the seventh, the Stars struck with a late rally. Callahan singled to center and moved to second on Cole Karr’s walk. After falling behind two strikes, and taking a pitch that just missed the zone by a hair’s width, Dalton drilled a liner to center off Linton hurler Nathan Frady. Linton outfielder Japheth House, caught in no-man’s land, hesitated to charge, and the ball dove into the turf as Callahan headed home.

“I was just waiting on a fastball, a pitch to hit to the outfield,” Dalton said. “It was just a fastball right down the middle. I thought he would catch it, it was in the air too long. But I’ll take it.”

The Miners (5-6) scored first with a run in the first, with Bracey Breneman stroking a two-out RBI single to left. The Stars answered with a run in the first and another in the second, loading the bases on Braydon Brown’s single, Ryker Hughes’ walk and Konley Woodward’s infield single. Colton Brown plated the run with a sacrifice fly.

BNL took a 3-1 lead in the third on singles by Evan Waggoner and Karr, followed by a RBI double from Dalton.

Linton powered back when Josh Pyne, an Indiana University recruit just back from a wrist injury, hammered a home run to left that rode the breeze and sailed out of reach to start the fifth. That same inning, the Miners pulled even and could have had more.

After two singles and a walk, House came up with the bases loaded. On a 3-0 pitch, he took a high strike that Gabe Eslinger – perched on third base – thought was ball four. As Eslinger took a couple of stray steps down the third-base line, Waggoner fired to the base to pick him off. House did walk to reload the bases and the tying run came across when Jaxon Walker was hit by a pitch.

“Evan is very smart back there (at catcher), always looking to throw behind runners,” BNL coach Jeff Callahan said. “We were lucky they didn’t take the lead.”

That set the stage for the drama in the seventh, with everyone holding their breath on Dalton’s lash.

“I knew he hit it hard,” Callahan said. “I was just hoping it would get down. It worked out for the good guys. We’ll take it.”

BNL had 11 hits, with Dalton, Karr and Brown all collecting two each. Frady went the distance on the mound and struck out three.

“Normally I would have taken the pitcher out in the seventh,” Linton coach Matt Fougerousse said. “But with three more games this week, I have to make sure I have pitching. And he wanted to stay in, and you have to let him. He competed his butt off out there.”

Whitt Callahan earned the win with 2 2/3 innings of relief work for Aden Pemberton.

The Stars will host Columbus East on Tuesday.