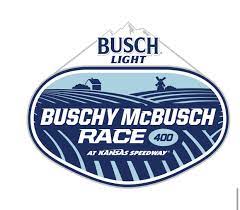 KANSAS – Momentum is top of mind for Chase Briscoe and the No. 14 Stewart-Haas Racing team leading into Sunday’s race at Kansas Speedway in Kansas City.

Briscoe is fresh off a career-best 11th-place finish in last weekend’s NASCAR Cup Series stop at Talladega (Ala.) Superspeedway and the next race is one that could place the HighPoint.com Ford Mustang back on the path of consistency.

Buschy McBusch Race 400 at Kansas Speedway in Kansas City is scheduled for Sunday, May 2 at 3 p.m.

The 1.5-mile Kansas Speedway has been the site of several highs in Briscoe’s career. Among his four NASCAR Xfinity Series starts there, he has a pair of top-three finishes, including a win in opening race of the Round of 8 in last year’s Xfinity Series playoffs. He also placed fifth in his lone NASCAR Camping World Truck Series start at Kansas.

Kansas is the site of the last of Briscoe’s six ARCA Menards Series victories in 2016, which propelled him to the series championship. He totaled 14 top-fives and 18 top-10s in 20 ARCA races that year. In the October 2016 Kansas 150, Briscoe started from the pole and led twice for a race-high 67 laps to secure the victory by 1.464 seconds over Austin Cindric.

Briscoe leads the Cup Series Rookie of the Year standings by 55 points over Anthony Alfredo after 10 races. With Rookie of the Year honors in the Truck Series (2017) and Xfinity Series (2019), Briscoe is looking to join Erik Jones and William Byron as only the third driver in history to claim the title in all three of NASCAR’s national touring series.

The No. 14 team was able to stay out of trouble in Talladega and you walked away with a finish just shy of the top-10. Do you expect that momentum to carry over to Kansas?

“I hope so. I love running at Kansas, and that kind of wide mile-and-a-half suits my driving style more than some of the tracks we’ve run at recently. I felt like we had some races this season where mistakes were made and we just didn’t get the chance to overcome them, but we had a few where luck was not on our side. I hope, after Talladega, that the luck is turning around and we can keep up the momentum and really use the confidence from that finish to get on track. Kansas is such a fun place to run and I’ve done well there in the past, so I feel like we can capitalize on the momentum and get a decent finish and maybe some stage points.”

How does driving style play into how you are able to lean on your teammates for advice?

“I think all four of us have different styles, but I still feel like it’s all relatively the same. But all four of us will have races where we struggle with the same thing, so I don’t think just because the other three drivers are different from me that it necessarily means we can’t take what they’re doing and learn from it. You still have to fine-tune to your driver. What Kevin Harvick thinks is perfect is not going to be what I think is perfect, and vice versa, and that’s the same with all four cars. The 10 (Aric Almirola) had a great run at Richmond, so we’re seeing things come together and improve, but we had work to do after the Vegas race earlier this year, and Kansas will be the first time back on a mile-and-a-half track to see if we’ve made progress on that.”

Is there specific progress that you hope to see at Kansas as a result of the work put in following the Las Vegas race?

“Running wide open for longer than just a few laps. That was where we had the biggest problem in Vegas. Kansas is a little bit different. I do feel like it’s going to be easier to run wide open there longer than most places.”