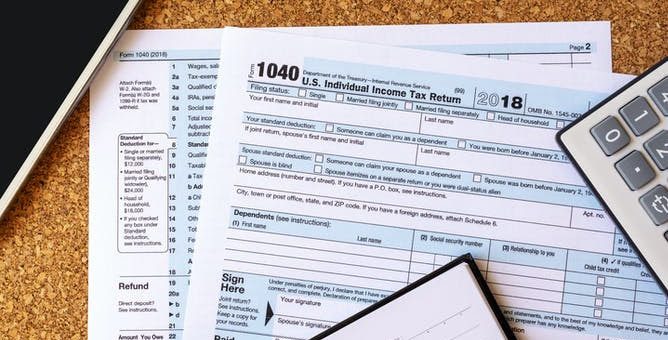 UNDATED – The Internal Revenue Service has postponed the April 15 tax filing deadline to May 17. If taxpayers need even more time to file federal returns, the agency added, they can request an extension until Oct. 15.

“This continues to be a tough time for many people, and the IRS wants to continue to do everything possible to help taxpayers navigate the unusual circumstances related to the pandemic, while also working on important tax administration responsibilities,” said IRS Commissioner Chuck Rettig.

The announcement may come as welcome news for many Americans, but it also raises an important question: Why should taxpayers have to navigate the tedious, costly tax filing system at all?

The case for a ‘simple return’

In 1985, President Ronald Reagan promised a “return-free” tax system in which half of all Americans would never fill out a tax return again. Under the framework, taxpayers with simple returns would automatically receive a refund or a letter detailing any tax owed. Taxpayers with more complicated returns would use the system in place today.

In 2006, President Barack Obama’s chief economist, Austan Goolsbee, premiered the “simple return,” where taxpayers would receive already completed tax forms for their review or correction. Goolsbee estimated his system would save taxpayers more than US$2 billion a year in tax preparation fees.

Though never implemented, the two proposals illustrate what we all know: No one enjoys filling out tax forms.

So why do we have to?

A costly and time-consuming system

Return-free filing is not difficult.

The U.S. system is 10 times more expensive than tax systems in 36 other countries with robust economies. But those costs vanish in a return-free system, as would the 2.6 billion hours Americans spend on tax preparation each year.

Maybe you’re wondering whether Congress is just behind the times, unaware that it can release us from tax preparation? Not true.

As an expert on the U.S. tax system, Beverly Moran, Vanderbilt University, sees America’s costly and time-consuming tax reporting system as a consequence of its relationship with the commercial tax preparation industry, which lobbies Congress to maintain the status quo.

Almost 20 years ago, Congress directed the IRS to provide low-income taxpayers with free tax preparation. The agency responded in 2002 with “Free File,” a public-private partnership between the government and the tax preparation industry. As part of the deal, the IRS agreed to not compete with the private sector in the free tax preparation market.

In 2007, the House of Representatives rejected legislation to provide free, government tax preparation. And in 2019, Congress tried to legally bar the IRS from ever providing free online tax preparation services.

Only a public outcry turned the tide.

According to the Treasury Inspector General for Tax Administration, which oversees IRS activities, private partners use computer code to hide the free websites and take unsuspecting taxpayers to paid sites.

Should a taxpayer discover a free preparation alternative, the private preparers impose various restrictions such as income or the use of various forms as an excuse to kick taxpayers back to paid preparation.

Consequently, of the more than 100 million taxpayers eligible for free help, 35 percent end up paying for tax preparation, and 60 percent never even visit the free websites. Instead of 70% of Americans receiving free tax preparation, commercial companies whittle that percentage down to 3 percent.

Perhaps you are guessing that there are valid policy justifications for avoiding government and empowering the private sector. Judge those arguments yourself.

One argument from commercial tax preparers is that taxpayers will miss out on valuable tax savings if they rely on free government preparation.

In fact, the government software would reflect the same laws used by the paid preparers with the same access to tax saving deductions or credits. Further, tax preparers like H & R Block promise to pay all taxes and interest resulting from a failed audit. As a result, these services have every incentive to take conservative, pro-government tax positions.

But taxpayers already know what information forms the government has because they receive duplicates of those forms. The incentive to lie does not increase because the taxpayer avoids weeks of tax preparation.

In the past, Republicans argued against high taxes. But after decades of tax cuts, Americans are no longer swayed by that argument.

Exasperating tax preparation, according to this argument, helps keep the anti-tax fever high. And that fuels public hate for government and the tax system.

One example is the earned income tax credit, a government program for low-income people. The credit is so complicated that 20 percent of the people who are eligible never file.

To date, the tax preparation industry has kept the system complicated because the potential cost to it in terms of lost revenue is vast.

Only public outcry can change the system.