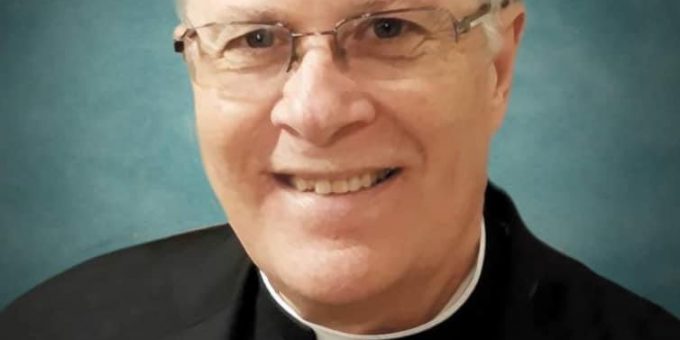 Richard W. Eldred was born on August 24, 1949, to John W. Eldred and Vera Beatrice Bledsoe in Terre Haute, IN.

As a child, he attended St. Patrick’s Grade School, then as a teen attended and graduated from Schutte High School. While living in Terre Haute, he attended Indiana State University and for more than 20 years, worked in the Eldred Family Moving and Storage Business. He entered the Seminary in Hale’s Corner, Wisconsin, earned a B.S. at Cardinal Stritch University and a M. Div. at the Sacred Heart School of Theology. He was ordained a Roman Catholic Priest for the Indianapolis Archdiocese on June 5, 1999. Before coming to St. Vincent and St. Mary in 2005, he served in Richmond, Indianapolis, and Mooresville.

He was instrumental in the opening of Becky’s Place, a homeless shelter for women and children in Bedford, and served on the Board of Catholic Charities. He had been a driving force in creating the Warming Shelter for Homeless Men in our area and he served on the Board of Bertha’s Mission, a local soup kitchen. He was a member of the Knights of Columbus and Hope Resource Center.

A man of God, he strived to be available to all he met. He was a wonderful human being and we were so fortunate to have him as our shepherd. God took him to Heaven a year ago today and our lives have never been the same. Rest in Peace, Father Rick. You have earned your reward!
Life has changed, not ended…

A Memorial Mass for Very Reverend Rickard W. Eldred will be held at 5:15 p.m. on Thursday, March 18, 2021, at St. Vincent de Paul Catholic Church in Bedford.

Local arrangements are by Ferguson-Lee Chapel of Thorne-George Family Funeral Homes in Bedford.