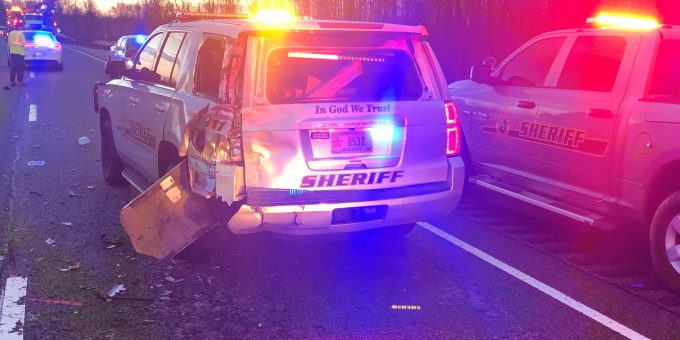 CROTHERSVILLE – On Friday at approximately 6:00 a.m., a Jackson County Deputy’s police SUV was struck by a pickup truck on I-65 northbound near Crothersville while the deputy was blocking traffic for a tow company that was removing a vehicle from an earlier crash.

The initial investigation by Trooper David Owsley, Indiana State Police-Versailles, indicated a Jackson County Sheriff’s Department 2020 Chevrolet Tahoe occupied by Deputy Jordan Hawn, was parked in the right lane of I-65 northbound near the 37.5-mile marker, near Crothersville.

Deputy Hawn’s vehicle was then struck from behind by a blue 2015 Chevrolet Silverado, being driven by 25-year-old Evan Elkins, of Louisville, Kentucky.

Hawn’s vehicle came to a stop in the right northbound lane of I-65. Elkins’ vehicle entered the median of I-65 and stopped. Neither Hawn nor Elkins was injured in the collision.

The right lane of I-65 northbound was closed for most of the morning for crash cleanup and investigation.

Alcohol and drugs are not suspected in the crash. The investigation is ongoing.

The Indiana State Police was assisted by the Jackson County Sheriff’s Department.

The Indiana State Police would like to remind everyone that Indiana law requires motorists to yield to emergency vehicles that have emergency lights activated.