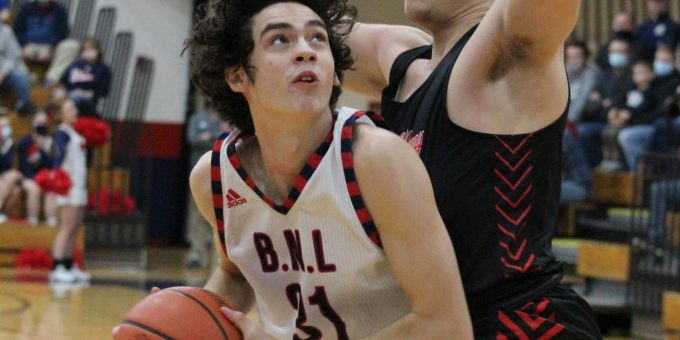 BEDFORD – The majority of the remaining contenders in Sectional 15 have already won something: a share of the Hoosier Hills Conference title. That crown was split three ways, for only the second time in league history.

The outsider in the semifinals? Bedford North Lawrence. The role of underdog fits perfectly as the Stars, peaking at the ideal time for the postseason, prepare to crash the champions convention at Seymour.

Winning this trophy means so much more. And there’s no sharing.

The Stars (13-10) will seek revenge for a regular-season loss when they clash with New Albany (16-6) in the first semifinal on Friday night. Defending sectional champion Floyd Central (13-5) will battle Jeffersonville (13-6) in the nightcap, and those winners will return to fight for the championship on Saturday night.

BNL tasted its first tournament success in six years with the opening-round victory over Seymour. Now the Stars have a chance to end more skids – 12 straight losses to the Bulldogs, no sectional titles since 2001. They’re riding a crest of momentum and confidence with a four-game winning streak. That makes them dangerous. From this point, any among the foursome is capable of cutting down the nets from Scott Gymnasium.

“There’s no question about that,” New Albany coach Jim Shannon said. “It’s another battle. Every game is a battle now. In the tournament, anything can happen. You have to be ready to play, be loose, throw it up and go get it.”

New Albany won the first contest with BNL 53-46 on Feb. 19 at BNL Fieldhouse. The Bulldogs were clinging to a 42-41 lead with four minutes left, then made the crucial plays to pull away. Tucker Biven popped free from a screen for a trey from the key. After two critical BNL turnovers, Josten Carter flashed free for a layup. And when the Stars went to chase mode in the final minute, Biven and Maddox Schmelz were left alone for layups.

Biven, a University of Louisville baseball recruit, finished with 25 points.

“That was an excellent basketball game,” Shannon said. “Every single possession mattered, both teams played pretty well. Both teams defended really well. It was a classic, right down to the wire.”

BNL’s Ben Cosner scored a career-high 22 points, including four 3-pointers in the first half. He went to the mid-range game for three buckets in the third quarter to keep the Stars within range, then scored off a lob to make it 42-39 in the fourth. Cosner (10.8 points per game) will draw substantial defensive attention, as will sophomore Colten Leach (13.6) and senior Kooper Staley (10.0).

“They tried to take Ben away in the second half the last time,” BNL coach Jeff Hein said. “But I think we’re tough to match up against because we have weapons out there. We have five guys (Jackson Miracle had 13 points against Seymour and Colton Staggs has scored 45 points the last four games) on the floor that can do something.”

New Albany will counter with scoring punch from Biven and Kaden Stanton, who give the Bulldogs a dynamic backcourt. Schmelz had 11 points against BNL the first time, and he’s the top defender.

“We know they have two really good guards,” Hein said. “(Jordan) Thomas has played well inside, so they’re a tough out. No question about that. But I like the way we’re playing. We’ll have to play a complete game.

“They’re shooting well. When you shoot well, you play well. Sometimes that becomes contagious. When Biven strokes a couple, the other guys feel like they can make them, too. That’s where they’ve been the last few weeks. You don’t want to get in a H-O-R-S-E game with them. Bloomington North tried that and got whipped.”

New Albany, which drew a bye into the semifinal, has five won straight, and the most impressive triumph on the recent list was a 56-41 victory over North (12-4) to end the regular season.

“That was big,” Shannon said. “Our kids seemed to have another pep in their step after beating that team. Our kids have been working, they’ve been taking it very seriously. We’ll see what happens.”

If BNL has an advantage, it’s the experience from Tuesday. The Stars got any tournament angst – which was not evident – out of the way while New Albany had to sit and wait.

“It always helps, just because we’re used to the surroundings and the routine, with an early game,” Hein said. “We know exactly what we’ll be doing. That can be an advantage, but once the ball goes up it won’t really matter.”

Floyd Central vs. Jeffersonville: In the second semifinal, the Highlanders will test the Red Devils with arguably the sectional’s best player in senior Jake Heidbreder, an Air Force Academy recruit who ripped Columbus East for a career-high 42 points in their regular-season finale.

Floyd Central received a bye for the second straight year, while Jeffersonville opened with a 57-39 win over Jennings County on Tuesday night.

“I’m a firm believer, if you get to looking at the draw, and feeling like you got a bad draw and complaining – or start patting yourself on the back for a great draw – that’s a receipe for losing really quick,” FC coach Todd Sturgeon said. “Every year, I preach to the team that it’s not a good draw or a bad draw. It’s just the draw. All we’re looking for is who we play and what time do we show up.

“Ultimately, you have to go play well, no matter who you’re playing. We’ll show up knowing Jeff is fully capable of beating us.”

The Highlanders won the first clash 54-44 on Jan. 15 at Jeffersonville. Floyd Central started the second quarter on an 11-0 run – 14-0 going back to the opening quarter – to go up 16-4, and opened 25-10 command at the half. Heidbreder scored 17 points, while Brandon Rayzer-Moore had 12 for the Devils.

The sectional champion will return to Seymour for the two-game regional on March 13.

Last meeting: On Feb. 19 at BNL, Tucker Biven scored 25 points as New Albany clinched its share of the HHC title with a 53-46 victory. Ben Cosner had 22 points for the Stars.

Game notes: New Albany has won 12 straight in the series. BNL is chasing its first sectional title since 2001. The Bulldogs have won 12 sectionals, the last in 2018, since the start of Class 4A competition in 1998.

Last meeting: On Jan. 15 at Jeffersonville, the Highlanders prevailed 54-44. Jake Heidbreder had 17 points for Floyd, while Brandon Rayzer-Moore had 12 for the Red Devils.

Game notes: Floyd Central is the defending sectional champion, and the Highlanders beat the Devils in last year’s sectional semifinal. Jeffersonville won its last sectional in 2019.