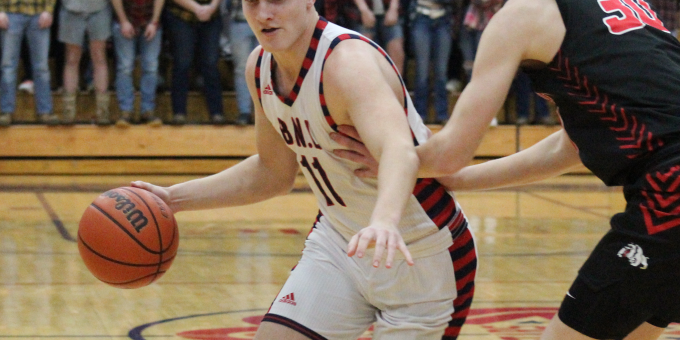 BEDFORD – The first owner of the Hoosier Hills Conference championship, at least one piece of that prize, has been identified. Upon investigation, Tucker Biven’s fingerprints were discovered on the crown. The evidence is overwhelming.

Biven, destined for the University of Louisville for baseball, decked Bedford North Lawrence with high heat, scoring 25 points while powering New Albany to a clinching victory over the close-but-no-cigar Stars on Friday night.

With Biven’s offensive strikes, with New Albany’s offensive rebounding power, the Bulldogs growled to a 53-46 triumph. They’re the first to break the four-team congestion at the top of the league standings as New Albany (14-6 overall) finished league play with a 5-2 record.

BNL (9-10, 3-4) was again dangerous, competitive with the best. Senior forward Ben Cosner made that happen, scoring a career-high 22 points. But in the final four minutes, with New Albany clinging to a 42-41 lead, the Bulldogs made their rightful claim for the title. If New Albany’s Jim Shannon were to copy Boston Celtics coaching legend Red Auerbach and light that victory cigar, it would have been sweet.

“I’m just tickled,” Shannon said after posting his 12th straight win over BNL. “There was pressure, and Bedford wanted to knock us off. We were in the same position last year (when a New Albany win cost the Stars a share of the conference title). You just try your darndest.

“Oh my gosh. The kids don’t understand the history. This is a tough place to win, the tradition.”

BNL made it tough, as Cosner was sensational. He buried four 3-pointers in the first half, went to the mid-range game for three buckets in the third quarter to keep the Stars within range, then scored off a lob to make it 42-39 in the fourth. Kooper Staley’s drive made it 42-41, and the Stars were just a few plays from a huge win.

That was a lot of bark. The Dogs had the bite.

Biven popped free from a screen for a trey from the key. After two critical BNL turnovers, Josten Carter flashed free for a layup. And when the Stars went to chase mode in the final minute, Biven and Maddox Schmelz were left alone for put-away layups.

BNL spent the entire night in the chase position. Its last lead came at 12-9 on a Staley bomb. The Stars trailed by as many as 7 in the first half (25-18 on a Biven rebound basket) and scrambled back to 25-23 on Jackson Miracle’s layup just in front of the halftime buzzer. They drew even at 27-27 on a Cosner jumper early in the third, then slipped down by 7 again (38-31).

Colten Leach scored off a lob and slid through traffic to find Miracle for a layup, and Cosner gathered a lob for another bucket to make it a one-possession deficit. After the Staley attack that made it 42-41, BNL had only one basket (a Miracle miracle tip with 45 seconds left) until Leach swished a bomb from halfcourt at the final buzzer. That didn’t matter much.

Biven was unstoppable, hitting four treys, hitting all four of his shots in the fourth quarter when New Albany needed them.

New Albany’s other key stat was 9 offensive rebounds. The Bulldogs rebounded with anger, toughness and purpose, and they converted several of those second chances into points.

“No doubt from beginning to end, that’s where they got us,” Hein said. “They just killed us on the boards (28-22 total). We just couldn’t come up with the ball. That’s the difference.

”And Biven was the difference. Heck of a player Give him a lot of credit. He’s hard to guard. He had a nice night.”

Schmelz added 11 points, in addition to being the defensive stopper on Leach, and Jayden Thompson grabbed 10 boards for the Bulldogs.

With New Albany so intent on swarming Leach (BNL’s scoring leader) in the paint and shading Staley on the perimeter, Cosner stepped into the spotlight. Leach finished with 9 points and Miracle added 8.

“They’re good. Good team,” Shannon said. “They had a kid step up. Cosner was absolutely great, phenomenal. I knew he could score, but I didn’t think he could score like that.

“You can’t let Leach get a smell. I had to take Schmelz off Leach and put him on Cosner. What do you do? Hey guys, Mad Man can only guard one of them. Somebody else has to step up.”

For the Stars, Cosner did step up. BNL just hasn’t found a way to record that signature, shake-up-the-league triumph. Close can be heartening and maddening at the same time.

“Ben had a great night,” Hein said. “They were trying to take away Leach on the drive, taking Kooper away at the 3-point line. Ben took full advantage.

“We’ve been in games, we’ve just not been able to finish some of them off. But I can see some positive things with our guys. I don’t think we’ve played our best yet. We have a chance to peak at the right time.“

BNL will have a chance to prove that next week, finishing the regular season with three games in four days, starting at North Knox on Tuesday.