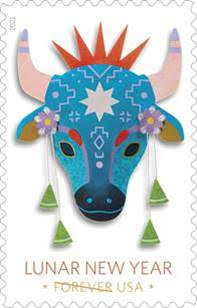 (UNDATED) – As the Lunar New Year approaches, the U.S. Postal Service Tuesday issued a new Forever stamp honoring the Year of the Ox.

The stamps are on sale at Post Office locations nationwide and online at usps.com/oxstamp. News of the stamp is being shared with the hashtags #LunarNewYear and #LunarNewYearOx.

“The Lunar New Year is an important holiday for many Asian communities around the world,” said Luke Grossmann, the event’s dedicating official and senior vice president, finance and strategy, U.S. Postal Service.

USPS, along with the Chicago Chinatown Chamber of Commerce, unveiled the stamp in a virtual dedication on the Postal Service’s Facebook and Twitter pages.

“We are thrilled to have been chosen by the U.S. Postal Service to introduce the release of its 2021 Lunar New Year ‘Year of the Ox’ Commemorative Forever Stamp,” said Patrick McShane, president, Chicago Chinatown Chamber of Commerce, noting that Chicago is designated as the stamp’s first-day-of-issue city.

The mask design on the stamp incorporates elements with symbolic meaning. Several of the patterns were created with the style of Asian textiles. Purple flowers represent the arrival of spring, which Lunar New Year also signals in Chinese culture. The star in the center of the ox’s head references the celestial themes of the Chinese zodiac.

Art director Antonio Alcalá designed the stamp with original artwork by Camille Chew. This Forever stamp is being sold in panes of 20 and will always be equal in value to the current First-Class Mail 1-ounce price.

The Year of the Ox begins Feb. 12, 2021 and ends Jan. 31, 2022. Personality traits and other attributes associated with the Chinese zodiac animals are thought to be common to people born in the years represented by those animals as well. For example, beliefs hold oxen — and those born in the Year of the Ox —  to be honest, diligent and highly dependable.

There are many traditions for ringing in a new year of good luck and prosperity. In communities across the United States, people shop for holiday food and other supplies, hang decorations and ceremoniously clean their homes to welcome the year with a fresh start.

Customers may purchase stamps and other philatelic products through the Postal Store at usps.com/shopstamps, by calling 800-STAMP24 (800-782-6724), by mail through the USA Philatelic catalog, or at Post Office locations nationwide.