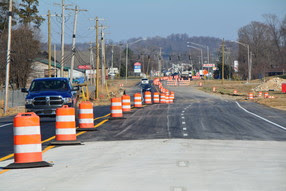 (MARTINSVILLE) – The fire station at the corner of State Road 37 and Smith Valley Road was part of the land needed to build a future I-69 interchange.

The White River Township Fire Department saw it as an opportunity to respond to the community’s growth and to plan for the future.

When the calendar changes from 2020 to 2021, road construction in Martinsville and Morgan County will change too. The focus will move from local street improvements and access roads to building the new I-69 lanes and interchanges.

Watch this short video to hear about the progress made in Martinsville this year.

Although it is open to traffic, continue to watch for workers and intermittent lane closures on S.R. 39 and Morton Avenue as construction in Martinsville is ongoing.

This access road has the right of way and does not stop where it meets Ennis Road near S.R. 37. Ennis Road has a two-way stop.

In Mooresville, signal crews are installing traffic detectors in the pavement at S.R. 67 and Pleiades Drive, near TOA and Reynolds Farm Equipment.