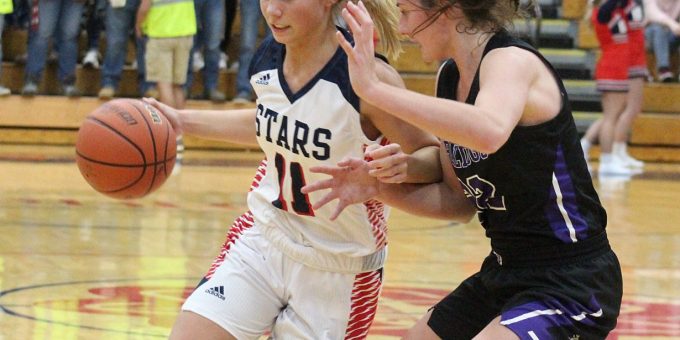 BEDFORD – Basketball coaches, always demanding, constantly seek the perfect game. Of course it’s almost unattainable, but that’s the goal. Don’t miss a shot, don’t turn it over, don’t give up points. How close can anyone come to that?

Last year against Brownsburg, Bedford North Lawerence’s Haley Deckard was perfect. With starting center Madison Webb sidelined by a sore knee, Deckard came off the bench to hit 6 of 6 shots, grab 7 rebounds, score a career-high 13 points and spark the Stars to an upset of the third-ranked Bulldogs.

Now the script is flipped. BNL (4-0) is ranked No.3, and the Bulldogs are scrambling to write down names on a starting lineup as the Stars seek their third straight victory in the series on Saturday night.

Brownsburg, with virus quarantines forcing a constant roster shuffling, has scuffled to a 1-3 start. But be not deceived. With two Div. I starters, the Bulldogs have a bite and are dangerous as the Stars make their second road journey of this tumultuous campaign.

Brownsburg, at full strength, will feature Ball State recruit Ally Becki (18.0) and Illinois-Chicago recruit Leah Yarbrough. Becki, who recently went over the 1,000-point mark for her career, has been brilliant. Brownsburg’s issue has been figuring out who has been available to be alongside her on the court.

“It’s early and we have yet to have our full team, so we are still trying to figure things out on both ends of the court,” Brownsburg coach Debbie Smiley said. “We have several kids back this week but could have more out pending tests. We will be fortunate to play one game this year with our full roster.

“Ally’s strength is her motor. She is constantly working on both ends of the court.”

Becki had 25 points and 11 rebounds in a 53-48 loss to Plainfield and 17 points in a 47-44 setback to North Central. Kailyn Terrell had 16 points in the opening win over Cathedral and 14 in the loss to North Central, which bolted to a 19-0 lead and then held on for a frantic win as the Bulldogs battled back.

Brownsburg suffered a 43-40 loss to Ben Davis in its latest outing.

BNL owns two previous wins over Brownsburg – 65-57 in its first trip to face the Bulldogs and 48-37 in last year’s rematch at BNL Fieldhouse. Chloe McKnight had 17 points in that triumph, while Becki was limited to half her average.

The Stars are coming off a 53-42 conquest of Mooresville, although that performance marked the first time this season BNL did not show progress from one game to the next. The stagnant step caught Allen’s attention. Perfection is a forward march.

“If we come out and perform like we did on Wednesday, we’ll be in trouble,” he said. “Your character is revealed when you’re up against it. We’ll see how they respond on Saturday.

“I still love my team, love my kids. It’s a growth process, sometimes you have to take a step back to understand and fix things. Hopefully they’ll respond.”

McKnight and freshman Chloe Spreen lead the Stars in scoring at 14.8 apiece, while Irye Gomez is contributing 12.8 and Karsyn Norman is totaling 10.8. Even with all that balanced production in its high-octane attack, BNL has yet to click on all cylinders on offense as the Stars are shooting a pedestrian 39.6 percent overall and 34 percent from long range. They’ve made up for those stats with volume and defensive tenacity, forcing 19 turnovers per game.

“BNL will push the pace and look to put points on the scoreboard,” Smiley said. “They play hard defensively.”

Last meeting: Last year at BNL, Haley Deckard came off the bench to score a career-high 13 points as the Stars stopped the Bulldogs 48-37. Chloe McKnight paced BNL with 17 points. Allison Bosse had 19 for Brownsburg.