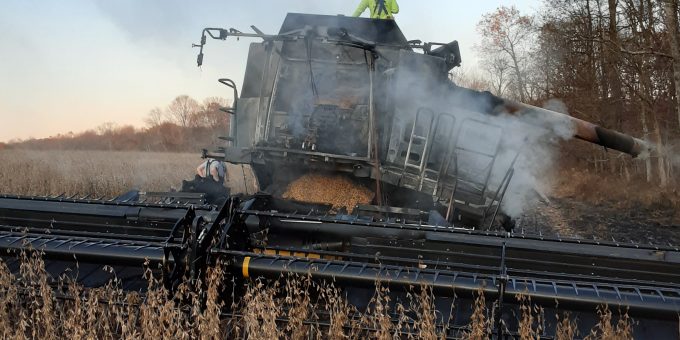 Firefighters from Perry Township, Indian Creek and Marshall Township responded to a combine fire and wildland fire on Friday afternoon. The fire was located in a remote area that was hard to access by emergency personnel.

Thick black smoke could be seen for several miles as firefighters made their way to the scene.

The call came in around 3:30 p.m. and firefighters were still on the scene until after 7:00 p.m. trying to extinguish the blaze and save the header to the combine.

“They had just purchased the header for the combine which cost approximately $130,000 and we were able to do that,” said Perry Township Fire Chief Jessica Voorhies.

11 firefighters from the three departments used three brush rigs and three tankers of foam to get the fire under control.

The combine is owned by Alan Stoll of Odon, Indiana. The farmers say they were just about to get all the crops in before this fire occured. They also report it has been a good year for crops. A second combine is available and will be used to finish up the harvest for the year.