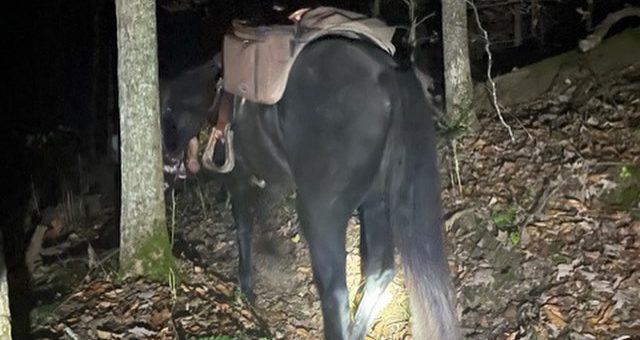 (BLOOMINGTON) – Monroe Fire Protection District crews from station 21 were called out Thursday to the Blackwells Horseman’s Camp around 4 p.m. for a reported male who had fallen from a horse and was unconscious and experienced problems breathing.

Upon arrival to the horse camp area, units from the Monroe Fire Protection District, IU Health Ambulance, Conservation Office, and a Sheriff’s Deputy assembled equipment and began trying to pinpoint the injured person’s location through GPS given from Central Dispatch.

Emergency personnel were assisted in finding the injured rider by Alex Pankoke, an off-duty firefighter from the Greenwood area.

Mr. Pankoke had been walking the trails in the area and had been told approximately where they were and knew how to get there. Monroe Fire Protection attempted to utilize an UTV to get back to the individual but due to terrain conditions they could not take it that far.

The patient was found conscious and alert and did not want any medical treatment.

IU Health had put a medical helicopter on standby before entering the woods due to the possible injuries of the victim but was called off once the patient was found and did not require transport.

Due to the length of travel into the woods of approximately 6 miles it was dark by the time crews left the woods. Those officials had to assist the two individuals and their horses back to the camp. Crews were on the scene for almost 6 hours.