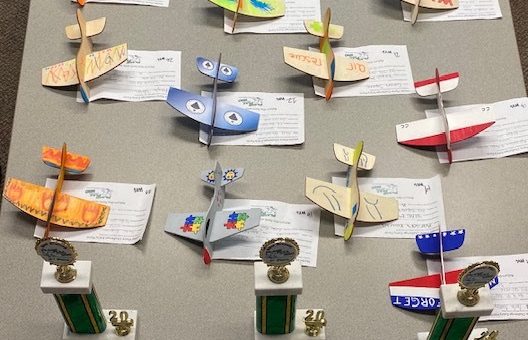 (CARLISLE) – Indiana Department of Correction (IDOC) staff entered the Special Olympics Model Plane Challenge to show their support for what Special Olympics does for their participants and their families.  Wabash Valley Correctional Facility (WVCF) crafted 16 planes for the challenge.  The facility also made a monetary contribution of $1200.  WVCF has been a long time supporter of Special Olympics Indiana.

The WVCF staff shown below stated the following about the experience and how thankful they were that their family member was able to participate.

Truedeen Everhart said, “My grandson understands how important it is to give back to the community, but this was a positive way to reinforce it.”  His plane was named “Patriot” and won a Best Dressed award.

Erin Padgett said, “My daughter really enjoyed participating in something so special.  It gave her a chance to use her creative side as well.”

Her plane was named “Flower Patch” and also won a Best Dressed award.

Earl Brock said, “I am thankful my son got to be a part of something like this.  He put a lot of thought into what he drew and why.”

His plane was named, “God’s Plane” and won a Farthest Fliers award.