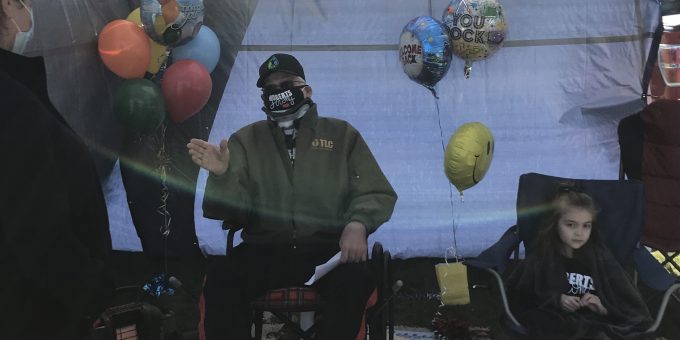 (OOLITIC) – On Saturday afternoon, community members and emergency responders welcomed home Robbie Roberts who was injured in an accident in Oolitic earlier this year.

This was Roberts first week home after spending more than 100 days in the hospital and a rehabilation center.

Roberts survival is considered a miracle by family members and emergency first responders after suffering serious injuries in the crash.

His injuries included an internal decapitation, as his skull was separated from his spine. Doctors say only 40 percent survive that injury. Every bone in his body was broken. He also suffered a torn aorta, injuries to his spleen, and other internal injuries.

Robert’s son, Josh, who was driving that day, was also injured in the crash. His survival is also considered a miracle as he suffered neck and back injuries that day.

Both had to be freed from the wreckage when the crash occurred. Emergency personnel spent several minutes getting Robbie out of the vehicle and sent to the hospital.

The accident occurred on a rainy day and a medical helicopter was not able to fly to the scene due to weather conditions.

Roberts was taken to IU Bloomington Hospital to be stabilized then airlifted later to Methodist Hospital in Indianapolis.

Over the course of his stay in the hospital he was given more than 100 pints of blood to save his life.

Neither Roberts or his son Josh remember anything about the accident except what they were told.

Saturday was a day to celebrate when Roberts returned home and was greeted by emergency first responders that took care of him that day.

The personnel from IU Health Ambulance Service and the Oolitic Volunteer Fire Department showed up Saturday to see Robbie and congratulate him on his return home.

But it was the first responders who were thanked for saving the two men.

“I am amazed to see him; I believe in the good Lord, and he has a lot to do with this,” said Mike Harris, paramedic with the IU Health Ambulance Service. “He had multiple injuries and either one could have killed him.”

Harris worked on both Josh and Robbie.

“I figured out quickly however that Robbie was in more serious trouble. But we got Josh out of the way. We had to work for a while in getting Robbie out,” said Harris.

“Thankfully, everything started coming together. The internal parts of the car started loosening up in order to get him out. Ordinarily, it does not work out that way, ” Harris added. “In my thirty years, I do not have a lot of years left in this profession, things like this make me realize I chose the right path. Just seeing him today shows how the Lord can just fool us at times.”

Cars horns, signs, and yelling all expressed how people felt about Robbie and how they were glad to see him home. Robbie in return waved his hands telling everyone he appreciated their prayers and support.

Members of the Oolitic Volunteer Fire Department brought some flowers and got to meet Robbie in person. Roberts thanked them for all they did for him and his son on that fateful day.

“It’s a miracle from what everyone has told us… it’s just a miracle for him to be alive,” said Josh Roberts who’s wife just gave birth to a baby girl on Monday. This is the couple’s second child.

Robbie’s wife, father, brother, two children, and grandchildren got to be part of the fun on Saturday in addition to many from his church family from Tunnel Hill Pentecostal Church in Owensburg.

“The devil tried to take me out. In return I am going to sing and tell everyone about how good God is. God is good all the time,” said Robbie Roberts. “I am thankful for what he has done for me.”