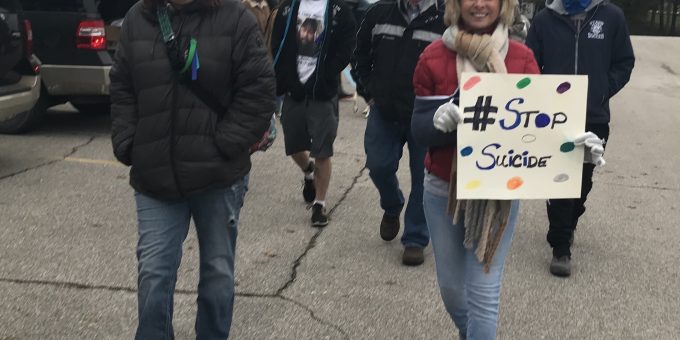 (BEDFORD) – Two groups came together Saturday morning to bring about awareness on a subject that sometimes is very difficult to discuss – suicide.

This topic is especially hard for men and those who deal with mental health issues because of the stigma associated with it.

The Lawrence County Suicide Coalition and Darkness Into Light joined one another to bring the common goal of supporting those who have attempted suicide (survivors) and support the families of those who have loved ones who committed suicide.

“I myself have struggled with suicide my whole life and attempting suicide. I have attempted suicide about twelve times. My first attempt was at five years old, I am now 33,” said Amber Kelley of Darkness Into Light.

“The reason why we started this group is to bring awareness, especially with men. When men struggle there is such a stigma, they are not allowed to talk without being ridiculed, put down, and seem weak,” said Kelley. “We have lost five men that were very close to us in the last six months just this year and this is why this event is so important to us.”

“I am here to represent my baby brother (Bobby Booker). He passed away this year on July 25th trying to let the guys know they can reach out and talk,” said Kristen Brummett who attended the walk on Saturday.

The Lawrence County Suicide Coalition has been in existence ten years, with being very active the last five according to Terry Sanders, one of the organizers of Saturday’s event.

The organization wants to be able to educate the people of Lawrence County about the prevalence of suicide, preventive steps to take, signs to watch for, and to help those who have attempted suicide and the people left behind.

The group hands out literature and tries to work one on one with those struggling, direct them to the crisis hotline, and Centerstone is a local counseling center that helps with mental health issues.

“People should not be afraid to talk if they need help. The stigma around mental problems has to go away so we can help these people.”

Approximately 50 people showed up Saturday morning. The Bedford mayor made opening remarks and prayers were offered before the group started out on the walk from Thornton Park Shelter House and made their way back.

A. Some People Are More At Risk For Suicide Than Others

B. Always watch for Warning Signs of Suicide:

Behaviors that may signal risk, especially if related to a painful event, loss, or change –

People who are considering Suicide Often Display One or More of the following moods.

Assume You are The Only One Who Will Reach Out:

If a person says they are thinking about suicide:

Take Them Seriously – Someone considering suicide is experiencing a life threatening health crisis and may not believe they can be helped. Work with them to keep them safely away from lethal means like firearms and drugs and remind them that their suffering is temporary.

Stay with them and call the National Suicide Prevention Hotline 1-800-273-TALK ( 8255) Be sure to follow up after the crisis to see how they are doing.

If You Are The Struggling:

If you would like more information about these local organizations go to their Facebook page – Darkness Into Light https://www.facebook.com/groups/274214447190349

Information for this story was also provided by American Association for Suicide Prevention and APA.org.