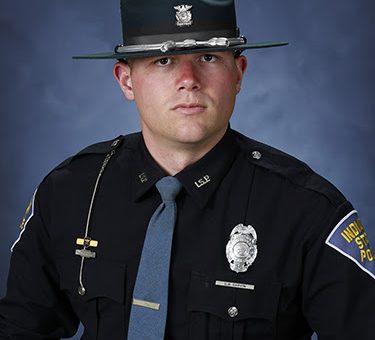 Trooper Garvin is a 2008 graduate of Eastern Greene High School and is originally from Bloomfield. He graduated from the Indiana State Police Academy in December 2015 and has primarily patrolled Greene County.

Caleb previously worked as a Jailer for the Brown County Sheriff’s Office for 5 years and served as a Reserve Officer for the Ellettsville Police Department for 4 years before becoming an Indiana State Trooper.

Trooper Garvin has an associate degree in Law Enforcement from Vincennes University.

Trooper Garvin has been a member of the Bloomington District ACES since August 2017 and works closely with the Indiana State Police Drug Enforcement Section.

“Caleb is a hard worker who can be counted on and trusted to do the right thing for the citizens we serve,” said Sgt. Greg Day. “He has an unparalleled work ethic and we are lucky to have him at the Bloomington District”.