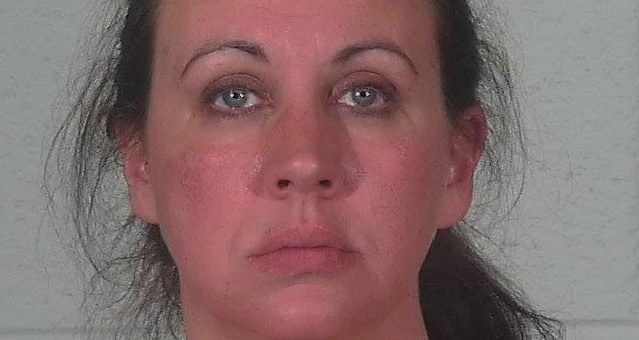 The incident occurred as Walker was transporting an inmate to the Steuben County jail.  Walker was driving northbound on State Road 127 coming into the round about circle intersection in downtown Angola.

A Chevrolet HHR passenger car came around the circle southbound in the wrong direction, causing Walker to take evasive action to avoid collision.

Fortunately, Angola Police Sergeant Brandon Booth and ISP Trooper Dan Burkey were close by at the time, and were able to get the driver stopped on Washington Street near US 20.

During the course of the traffic stop both officer’s quickly recognized that the female driver, 40-year-old Hannah L. Gore, of Hillsdale Michigan was showing obvious signs of intoxication.

Trooper Burkey conducted a roadside investigation for impairment, and then transported Gore to the Steuben County jail for further testing. During the course of his investigation, Trooper Burkey was able to determine Gore’s level of alcohol intoxication to be well over twice the legal (.08) limit.

Gore was placed under arrest without incident and booked into custody at the Steuben County jail, pending an initial hearing on the matter.

Troopers arrested 40-year-old Hannah Laine Gore, of Hillsdale Michigan on charges of operating a vehicle while intoxicated endangerment, OWI, OWI with a blood-alcohol content of 0.15 percent and issued citations for traveling the wrong way on a one-way street and having no valid driver’s license.