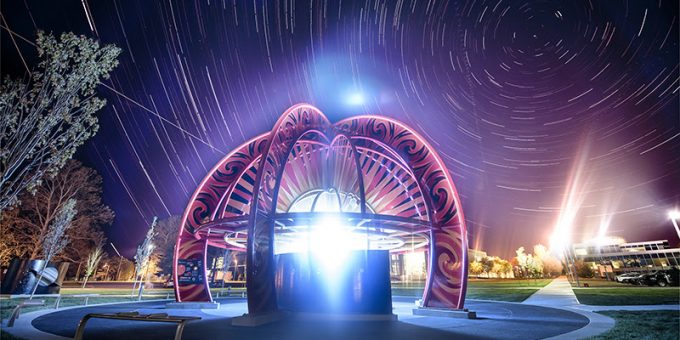 (WEST LAFAYETTE) – The 25th annual Purdue Space Day, an event that allows children the opportunity to learn about space in a fun and engaging environment, will be held virtually Oct. 24.

Purdue Space Day began 24 years ago, in November 1996, with around 120 grade school students participating and 40 Purdue students who ran the program. The event allows children the opportunity to learn about STEM (science, technology, engineering and math) in a fun and engaging environment.

Parents are encouraged to join their children as they do the activities so that they can get the most of their Purdue Space Day experience.The event is free to the public. The participants are divided into three age groups: grades 3-4, grades 5-6 and grades 7-8.

Registration for this year’s virtual Purdue Space Day is now open.  Participants may register here and may submit questions to a astronaut panel here.

Purdue will supply a list of household materials that participants will be asked to provide, and other materials for the activities will be mailed in early October. In order to receive these materials from Purdue, families must register by Oct. 2.

Children can still register up to the event, but they will not receive any materials from Purdue if they register after Oct. 2.

Brown flew on STS-28 (in August 1989), following which he served as astronaut member on the Space Station Freedom Program. He next flew on STS-48 in September 1991. With the completion of his second mission, Brown logged over 249 hours in space.

Ross flew as a mission specialist on Space Transportation System-61B (1985), STS-27 (1988) and STS-37 (1991); was the payload commander on STS-55/Spacelab-D2 (1993); and served as a mission specialist on the second space shuttle to rendezvous and dock with the Russian Space Station Mir, STS-74 (1995), the first International Space Station assembly mission, STS-88 (1998) and on another Space Station assembly mission, STS-110 (2002). A veteran of seven space flights, Ross has more than 1,393 hours in space, including 58 hours and 18 minutes of extravehicular activity on nine spacewalks.He was the first human to be launched into space seven times. These seven flights comprise a world record that Ross now shares with one other NASA astronaut. His number of spacewalks is tied for second highest among NASA astronauts.

Walker was confirmed by NASA in 1983 as the first industrial payload specialist and accompanied the McDonnell Douglas CFES equipment as a crew member on Space Shuttle missions 41-D, 51-D, and 61-B, accumulating 20 days of experience in space and traveling 8.2 million miles.

Hernandez flew on the 128th Shuttle mission and the 30th mission to the International Space Station in 2009. During his NASA career, he worked as an electronics engineer, materials research engineer and a deputy program manager.