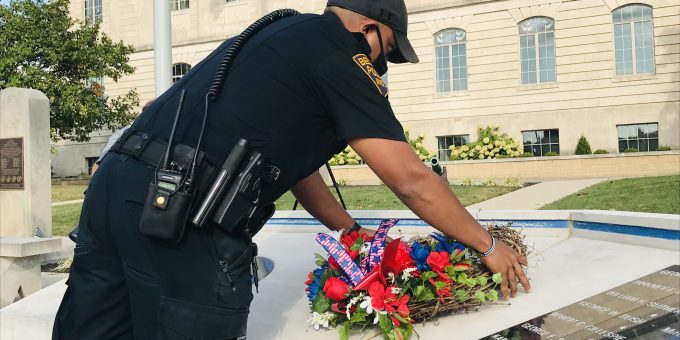 (LAWRENCE CO.) – Saturday’s “Back The Blue” event at the Lawrence County Courthouse was the third event to show support for law enforcement officers of Lawrence County.

Businesses and supporters of law enforcement held a dinner with speakers at the Boys & Girls Club of Lawrence County last month, Lawrence County GOP officials held a community event at the Lawrence County Fairgrounds, and Saturday’s “Back The Blue” event was organized by Sons of Thunder, the Scallywags Motorcycle Club, as well as Robert Brummett, Valarie Roberts, and Tim Morrow.

The event brought people from Lawrence County and others from across the state to show their support.

Tamara Watson, from Columbus, who is a retired Indiana State Trooper and teaches gun safety to women, came down to speak and show support.

“My community in Bartholomew County has yet to hold one of these rallies supporting law enforcement,” said Watson.

Saturday’s event not only showed support to law enforcement officers but to all emergency responders which includes local fire departments and emergency medical personnel from Lawrence County.

Before the event even got started the Shawswick Fire Department was summoned to a combine fire out on State Road 58 East. Marion Township was dispatched to possible house fire in the City of Mitchell.

Bedford Mayor Sam Craig has worn the uniform as a police officer, first as a deputy for the Lawrence County Sheriff’s Department, then as a Bedford Police Department officer, and finally he served as sheriff for Lawrence County for eight years.

“The sacrifice that families make as their husband and wives make as a family is unbelievable; missing holidays, birthdays, and other special events to keep the community safe,” said Mayor Craig.

“We have a mayor that supports our police department and will not tolerate the nonsense that has went on in other communities across the United States,” said Millard Jones, pastor of East Oolitic Community Church, and Shawswick Township Trustee. He then led citizens in a prayer of protection over the county’s emergency personnel.

During her speech retired Indiana State Trooper Tamara Watson reflected on a time when it was a citizen who came to her aid on Interstate 65. She was off duty and ended up in assisting a pursuit in Jackson County. Watson needing help in apprehending the suspect, and a citizen stepped in to help apprehend the suspect.

“Law enforcement officers cannot do it alone and they need the help of their community,” said Watson.

During the event a tribute to fallen officers was made as Taps was played and a Bedford Police officer laid a wreath at the Law Enforcement Memorial at the Lawrence County Courthouse.

According to the Federal Bureau of Investigations, 37 law enforcement officers were fatally wounded in 2020. During the previous year for the same time period, 30 officers were killed.

Of those officers killed in the line of duty, eight were victims of an ambush (entrapment/premeditation) and two were a victim of an unprovoked attack. 33 law enforcement officers have been reported accidentally killed in 2020. During the previous year for the same time period, 29 officers were accidentally killed.

During the event, there was a counter protest across the street at the Harps Commons area, where signs were held up reading, “Justice No Peace” with the faces of Trayvon Martin and Breonna Taylor. The protesters held up the signs and did not speak during the counter protest.

The security detail tried using barricades to prevent traffic from going down J street as counter protesters were circling around the courthouse on 15th and 16th streets. However, the Bedford Police Department advised them they could not do that and removed the barricades from obstructing traffic.

The event went on as planned with no major incidents.