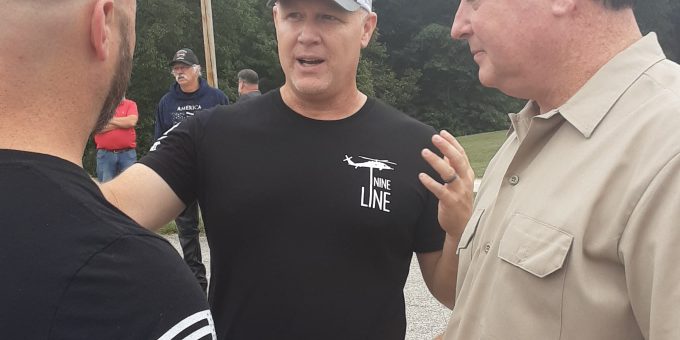 (BEDFORD) – Indiana Attorney General candidate Todd Rokita was in attendance at the “Back The Blue” event at the Lawrence County Fairgrounds Saturday morning to send off more than 100 motorcycle riders.

The event was sponsored by the Lawrence County GOP to allow the community to show support to local law enforcement officers.

In addition to the motorcycle ride, there was a car show, K-9 demonstration by local law enforcement officers, and food vendors from Holt’s Cafe and Celebrations Ice Cream on hand.

The event was well attended and brought people of all ages to show solidarity and support.

“This just makes me feel good to see all the people that came out and support us as law enforcement officers,” said Captain Morgan Lee who helped organize the motorcycle event.

Fry was arrested back in 1994, facing more than 260 years for serious crimes. 26 years later Fry has changed the direction in his life, and his feelings about police officers.

Fry greeted people when asked how he was doing today with “I am better than I deserve.” With a smile on his face Fry says he can be proud of the changes he has made.

Following the K-9 demonstration, attendees got to meet the officers and their dogs. Many children had a great time greeting their new K-9 friends.