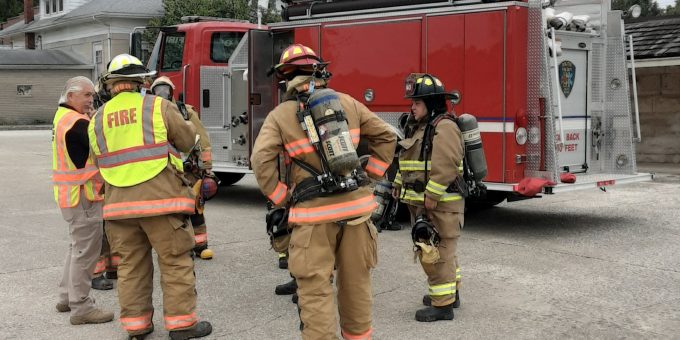 (OOLITIC) – The phrase “it can’t happen here” is something that most small towns and communities say because their communities seldom if ever find themselves involved with a major disaster.

The likelihood of a major incident such as an earthquake, hazardous materials incident, or terrorist attack is something that will likely not happen in a community of fewer than 2,500 residents or less. Yet anyone in emergency services knows that is a dangerous assumption.

Even more unlikely is if every elected official of a community became incapacitated by one single incident. But what if it did happen?

How would the local government continue to function, should city council members in charge of your community no longer being able to perform their duties?

On Friday and Saturday Oolitic Town officials took part in an exercise to test the plans and readiness of town officials, emergency personnel, and other forms of government.

The drill on Saturday took place at the Oolitic Town Hall located at 109 Main Street with the Oolitic Fire Department and other Lawrence County volunteer fire agencies taking part in the hands-on decontamination of personnel and possible causalities.

The practice drill included a 9-1-1 call into Lawrence County Central dispatch with an unknown medical emergency and possible assault at 109 Main Street. A person acting as a disgruntled former city council member was carrying a jar of Methly Paritihon (herbicide) which is a white powdery substance.

The person entered the Oolitic Town Council Chambers, opened the jar, and threw the jar of powder on council members seated at the table. The powder covered most of the council members and the table, walls, chairs, and floors during a town council meeting.

The assailant yelled ” you are a bunch of worthless weeds,” and “this is for your action against me,” and exited the building.

Several emergency agencies then went into action testing their readiness, plans, and skills in dealing with this simulated drill.

A final report will be made available to the public at a later time to determine how each agency did, as well as recommendations on how to improve.