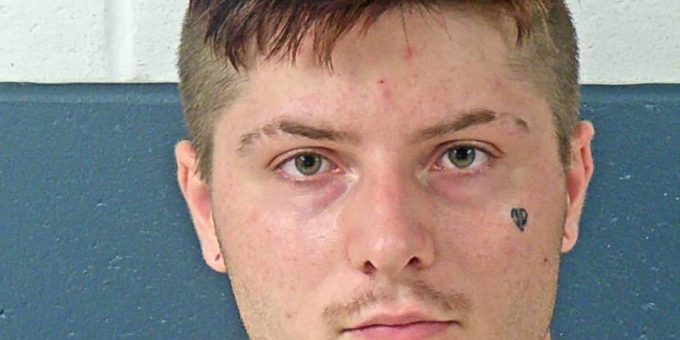 (BEDFORD) – A Mitchell man was arrested Monday on a warrant charging him with criminal mischief after he admitted to shooting out car windows.

According to a probable cause affidavit, on July 7th, at approximately 2:10 a.m., Bedford Police officer were called to R&L Transmission located on 5th Street in reference to a male breaking out car windows.

The caller told police the male exited a blue van.

As the officer exited his patrol car, he noticed the rear driver’s side window of the van was shattered.

Police attempted to make contact with the owner of the vehicle but was unable to.

That officer continued to locate the owner and check the area where the van was located.

Another officer responded to R&L Transmission. A male told police a male wearing a blue shirt and blue jeans left in a blue 2000’s model minivan.

While searching the area, an officers located a blue Dodge Caravan traveling northbound on Lincoln Avenue. The officer stopped the vehicle.

The front seat passenger was identified as Nevaeh Workman and the rear passengers were identified as Olivia Chapman, Brayden Bush, and Daniel Owen. Brayden told police the vehicle belonged to his mother.

While speaking to the occupants officers saw a gray CO2 pistol at the feet of Daniel Owen.

Bradley Bush told police they were coming from Oolitic and were heading to Hoosier Pete’s to get something to drink and he also said that
no one was involved in breaking vehicle windows.

Due to the lack of evidence at the time, officers released all the occupants and the van from the scene.

The video captured Owen walk up to a Ford Focus parked at the R&L Transmission lot and shoot out the window and continue to walk east on 5th Street. All the other vehicles that were damaged at R&L Transmission were east of the Ford Focus.

On July 8th Police went the home of Danelle Bush and wanted to speak to Brayden. He was not home but his mother called him and he returned to the home.

Brayden said that Daniel Owens was the one responsible for breaking the windows.

Brayden told police Daniel and Bradley broke the window out of a car with their fists while they were in Oolitic. He did not know who the car belonged to. After that they drove back to Bedford. They stopped across from lot that had several cars. Daniel got out of the van, walked across the street and he saw him shoot out windows on vehicles with a BB gun that Daniel had on him. Brayden said he did not know that is what Daniel was going to do.

On July 9th police spoke with Daniel Owens. Daniel took responsibility for breaking all the car windows with a BB gun that was in his possession at the time. When asked to describe the events of the night Owen said that he was at home when Olivia, Neveah and Brayden came to the home. They got into Brayden’s vehicle and went driving around the neighborhood. For a reason that Daniel couldn’t explain he started shooting the BB gun at vehicle. Daniel said he was sitting in the middle seat of the van.

As they drove around the neighborhood, and other parts of town, Daniel shot windows out of various vehicles. Daniel told police Brayden knew what was going on. They drove to Oolitic and picked up Bradley. They drove back to Bedford and ended up near GM, and stopped at a church. Brayden let Bradley drive the van. Daniel said that they were near CAP Group when Bradley pulled into a drive. Daniel said he got out of the van and walked over to R&L Transmission and shot windows out of vehicles there.

Police told Daniel they had reports on 22 different vehicles that had their windows shot out. He said that was probably correct, but did not know for sure.