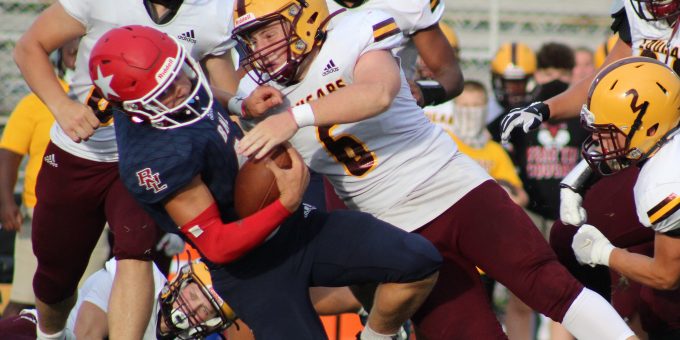 BEDFORD – No hurricane remnants, often threatening but stopped on the horizon. A rainbow even licked the south end zone as storms skirted away. Bedford North Lawrence still got rocked.

The Cougars were hungry, ready to win, stinging like scorpions. They ran this show.

Actually the show was aerial. Bloomington North quarterback Reece Lozano threw for 251 yards and two touchdowns, leading the Cougars to a 48-0 blown-away victory on Friday night. Tight end Aaron Steinfeldt, bound for Indiana University, had 3 catches for 95 yards and a score as North (1-1) triggered the mercy-rule, running-clock scenario in the second half.

BNL (0-2) was already at North’s mercy, depleted by injures and the forced quarantines of four starters after virus exposure. Add another to the list as sizzling junior quarterback Brye Lewis, one of the few highlights for the Stars, was held out of action with a left knee injury in the second half. He will see medical doctors on Tuesday.

Until then, BNL can only hold its breath. The Stars, with multiple freshmen on the field most of the time, had their breath taken away by North’s high-altitude offense and big-play makers. The Cougars won in breakaway style for the second straight year.

“They were bigger, stronger, faster,” BNL coach Steve Weber said. “That’s all we can say. We’re not going to win that game 10 out of 10 times.”

From that point, the Stars settled and even gained ground as Lewis, always elusive, guided his team near the red zone. The drive stalled when Kayin Miles broke up a pass and Gavin Scherschel was stopped short on fourth down at the 29.

The next drive was promising as well, with Lewis scrambling loose for 27 yards, with Scherschel muscling up the middle for 20. But Lewis was intercepted by Tyrell Rochell to end that series. And that would be the last scoring chance.

“From the get-go, the energy wasn’t there,” Weber said. “The kids were down. You get a score and get some energy built up, but it just didn’t work.”

North scored twice late in the half to pull away. Cody Mikulich gathered a swing pass and scampered 63 yards, setting up his own 5-yard touchdown run at 3:14, and Lozano connected with Steinfeldt for a 42-yard TD bomb at 1:16.

“Our offense did a great job taking advantage of opportunities,” North coach Scott Bless said. “Those scoring situations are what we have to do, what we failed to do a little bit last week.

“I felt like we were clicking. When we have all of our weapons working, we can be tough to defend. We had that tonight.”

North started the running clock (when the difference reaches 35 points) by scoring on the first drive of the second half, a 49-yard strike to Bailen Murphy leading to Lozano’s 2-yard dive. North added two more scores (Mikulich from 2 yards with 2:11 left in the third, Aidan Steinfeldt from backup quarterback Cayden Riester on the final play).

BNL had the unique stat of 9 first downs to North’s 6 in the first half, yet trailed by 4 scores. Lewis ran for 130 yards. He limped off for two plays late in the first half, returned to take control of the offense for the last series of the half, but was held out by team medical personnel after that. The initial prognosis is a stretched ACL ligament.

Without him, BNL was punchless. The attack was also one-dimensional as Lewis was 1 of 8 passing for 0 yards with the interception. North eventually loaded the defensive box with 8-9 tacklers.

”We tried to make them spread out,” Weber said. “We have to do other things, and we weren’t so good at that.”

“Timely stops,” Bless said. “A little bend-don’t-break makes defensive coaches nervous. We knew he was the guy to make it go for them. I was impressed with how he got it downhill. I was proud of our defense, keeping their resolve, not hitting the panic button.”