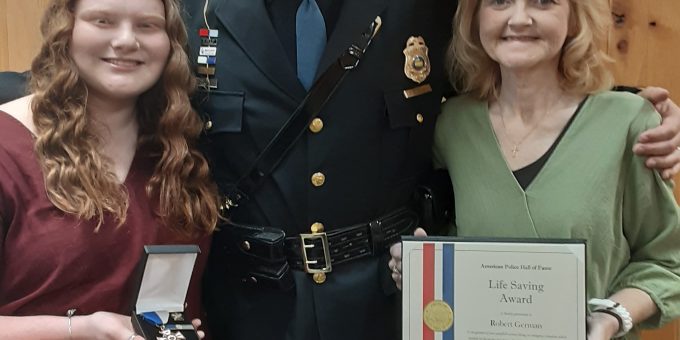 German was given the award by Mitchell Mayor J.D. England and Mitchell Police Chief Mike Hardman from the American Police Hall of Fame National Awards Program. A room full of people were on hand to congratulate German on his professionalism and dedication to serve the public.

On May 5, 2020 at approximately 10:20 a.m. Sergeant Robert German responded to a call of an unconscious female. Upon arrival, Sergeant Robert German began life saving efforts by performing CPR until paramedics arrived. The victim survived until July 13, 2020 when she eventually sucummed to her health issues.

Family members say they are proud of what German did in giving them extra time to say goodbye.

“It was such a honor for us he got the award,” said Cassie Terry.

“Sergeant Robert German’s actions are in keeping with the highest standards of professional service in policing. Sergeant German’s actions reflect great credit upon himself, the Mitchell Police Department, City of Mitchell, and the State of Indiana,” Major Duckett continued.