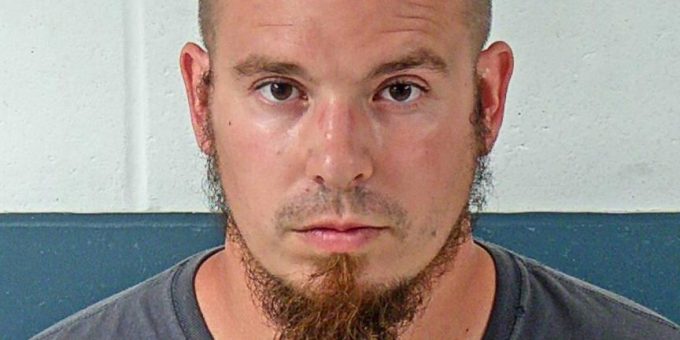 (BEDFORD) – Lawrence County Sheriff’s Department deputies arrested a Bedford man on a warrant charging him with domestic battery in the presence of a minor Saturday night.

According to a probable cause affidavit, on July 23rd, deputies were called to a home in the 620 block of Murray Holt Road at 10:04 p.m. after a report of Richardson and a woman involved in a domestic fight. They also learned Richardson was wanted on a warrant out of Ohio.

Police say while they were en route to the home, police received information from Richardson that he was in the sandpit with his son. He said Shanta Bowman had been drinking alcoholic beverages and taking illegal narcotics when she became angry and started hitting Richardson and grabbed him by the throat from behind, causing him to have injuries to his neck and jaw. He then swung his elbow around and hit her on the left side of the face, causing her to have injuries to the left side of her face. Richardson stated Bowman then got in their truck and drove off.

Bowman told police she was playing with her son in the sand when Richardson started getting angry because his brother was selling drugs (suboxone) and started hitting her from behind, so she turned around and hit him with a closed fist on the jaw. After hitting him she ran away and called 911.

When deputies arrived, an ambulance crew was tending to Bowman’s injuries. Officials noted Bowman had passed out.

While at St. Vincent Dunn Memorial Hospital for treatment and to x-ray her head and shoulder for possible injures, hospital staff determined her injuries were not extensive enough to hold her overnight in the hospital.

Bowman entered a not guilty plea on July 28th and is set for a pretrial conference on September 23rd at 9 a.m. in Lawrence County Superior Court I. She posted bond on August 7th and was released from jail. Judge John Plummer II ordered a no-contact order.

The Department of Child Services was called and placed the child with a family member.

While at the hospital Richardson received a CT scan and hospital staff determined his jaw was broken and he suffered a hairline fracture. They then advised him that he needed to see an oral surgeon and would only be able to eat soft foods. Due to needing extensive surgery, Richardson was not transported to Lawrence County Jail at that time.