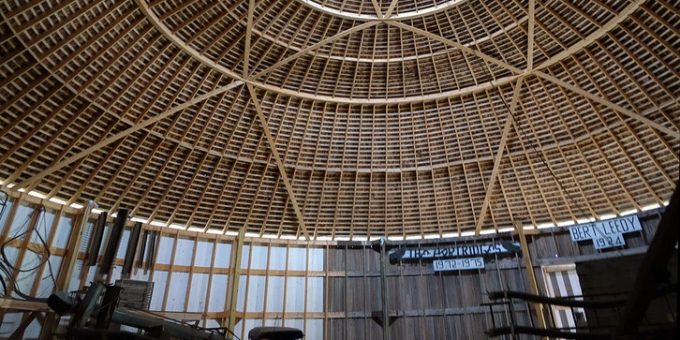 (BLOOMINGTON) – A new documentary from WTIU Public Television explores the rich history and significance of Indiana’s round barns.

A Rural Revolution: Indiana’s Round Barns premieres Sunday, August 30 at 8 p.m. on WTIU and Facebook Live.

The barn is an icon of the heartland’s rural landscape, yet one special type of barn is on the verge of disappearing altogether in Indiana. A Rural Revolution: Indiana’s Round Barns examines the importance of round barns to the state’s agricultural history and the current efforts to preserve them.

The circular barn, already a rarity among Midwestern farm architecture, is falling victim to nature, fire, age, and obsolescence. Among Indiana’s iconic rural landmarks, more than 220 round or polygonal barns once inhabited the Hoosier countryside. But in the state once touted as the “Round Barn Capital of the World,” fewer than a third remain.

Despite its scarcity, the round barn remains a rich part of Indiana’s agriculture heritage – an artifact from an age when the American farmer was just coming into his own. During a time when progressive farming was looking to innovation and experimentation to increase productivity and efficiency, the documentary reveals how the round barn played a central role in a rural revolution.

Learn more about the program at wtiu.org/roundbarns.

Following the premiere on WTIU and Facebook Live, A Rural Revolution: Indiana’s Round Barns will be available to watch on this website starting August 31.

A Rural Revolution: Indiana’s Round Barns is made possible with support from IU Credit Union and IU Center for Rural Engagement.