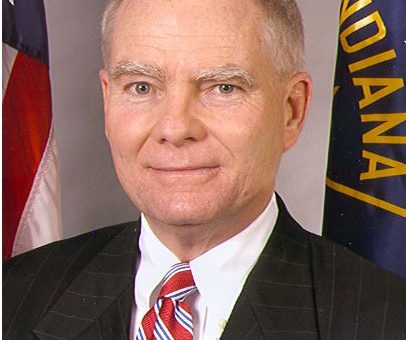 He served in the U.S. Navy during the Vietnam War, and he spent 11 months as a POW in Hanoi. He received many awards for his military service.

A graduate of the University of Notre Dame, Kernan returned home in 1974 to begin a career in business. In 1987, he was elected to his first of three consecutive terms as mayor of the City of South Bend.

In 1996, Frank O’Bannon, who was running for governor, asked Kernan to join him as the candidate for lieutenant governor. O’Bannon and Kernan were elected in November of that year. They also won reelection four years later in 2000.

When Gov. O’Bannon died unexpectedly of a stroke in 2003, Kernan was sworn in as the state’s 48th governor. He made history by appointing Kathy Davis as Indiana’s first female lieutenant governor.

Ultimately, Kernan and Davis were defeated by the Republican ticket of Mitch Daniels and Becky Skillman during the 2004 election, and Kernan retired from politics in 2005.

He moved back to South Bend, and he worked as an adjunct professor at the University of Notre Dame and through his own consulting firm until his death.

He is survived by his wife Maggie and seven siblings who live in the state of Maine and the Washington, DC area.

Gov. Holcomb directed flags to be flown at half-staff until Wednesday, August 5 in honor of Kernan and his service.

Governor Joe Kernan dedicated his life to public service, and never wavered in his principled dedication to doing the right thing. After being shot down in Vietnam and spending eleven months as a prisoner of war, Joe could have been forgiven for feeling like he had done enough for this country. But there was no “enough” in his DNA, and he spent the rest of his life tirelessly serving his city, this state, and a grateful nation.

Steph and I will have Maggie and the Kernan family in our prayers, and we know they can take comfort in the legacy of leadership that Governor Kernan leaves behind.

“I first met Joe Kernan in 1990 when he traveled with Frank and me to Eastern Europe following the fall of the Berlin Wall. Joe carried with him a box from a family in South Bend, which contained a new pair of shoes, to give to their relative in need who lived in the former communist Poland. He carried that box in his luggage across several countries, including the Soviet Union, until we got to Poland and could hand deliver the shoes to the relative. His compassion and skill, along with his innate and genuine ability to bring people in to engage, comfortably, whether just in a conversation or in working together on a project, made him a leader Hoosiers trusted. That was never more apparent than when he was unexpectedly placed into the Governor’s seat in September 2003. Joe Kernan was a partner in governing and leading Indiana with Frank, and most importantly the best of friend to both of us and to his beloved South Bend and Hoosier state. Our O’Bannon family heart aches for the loss of Joe, and our thoughts and prayers are with Maggie and all of the Kernan family.”

“Joe Kernan was a genuine public servant who understood, better than many, what service meant.

“Governor Kernan was someone who could set politics aside to move our state forward. He understood and brought great perspective to what was truly important – a skill fading from today’s discourse and something that impressed everyone around him – including me and others who worked with the governor. In everything he did, he brought an authenticity, attention to what truly matters, a quick wit and sense of humor.

“There are countless Hoosiers who benefited from everything he contributed to us in his life, which has been cut too short. But he measured success in his life through love for his wonderful wife Maggie, as well as his family and friends, who Indiana Democrats mourn with in his passing.

“I have spent the morning talking to Democrats from around the state remembering Joe Kernan, and I will treasure the memories we have with him and what I have learned from him for the rest of my life. Rest in peace, Governor.”