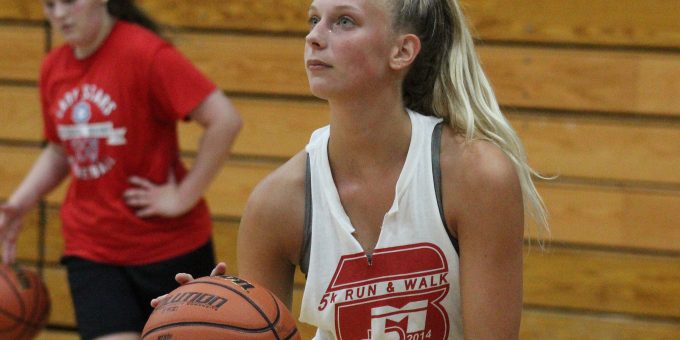 BEDFORD – Some teenagers have passed quarantine and slowdown, no-school time anchored on the couch, exercising nothing but the thumbs working the video-game controls. Nobody on Bedford North Lawrence’s current roster can be accused of that idleness.

The Stars, for the first time since the Class 4A semistate, were back on the court Tuesday morning, taking advantage of the IHSAA’s new July practice and conditioning timetable to assemble and start making up for the virus-impact loss of the usual June playing period.

Even with the absence of eight players (who were on the road with travel teams), BNL coach Jeff Allen was ecstatic to see his squad. After four months on the sideline, nothing could beat the sound of bouncing basketballs inside BNL Fieldhouse on a hot summer day.

“When this game is in your blood, and it gets taken away for four months in a row, it’s something you really miss, whether it’s the players side or coaching side,” Allen said. “I’m excited to be back out here. I think the kids are, too.”

While there was some timing issues with shooting and passing, there was no rust in terms of legs and conditioning. The senior leadership, even in the absence of personal meetings, have set a standard. Be ready.

“We had really good energy, really good enthusiasm,” Allen said. “It’s all about being together again. These kids are motivated. They have goals, ideas of what they want to do. So they’ve been working on their own. I have high expectations for this group.”

Lazy? Not this team. Makena Moore worked out six days a week (preparing for soccer as well). Grace Kinser squeezed in basketball amidst a six-day work schedule at a local restaurant. Chloe McKnight was launching shots in her driveway. That was when they were on their own. Now they can share the fun (or misery, in this heat index) with friends.

“I miss seeing my friends, going to school, working out with people,” Moore said. “I’ve been working out six days a week by myself, and it’s hard to get motivated to work out when you don’t have other people with you.”

Nervous? Even with the constant bombardment of COVID news, warnings and rumors, the Stars were eager to converge in the gymnasium. They were reminded of the rules – social distancing, no symptoms, no water fountains. Basketball is not a social-distancing sport, at least not with the defensive standards BNL sets. Six inches apart is too far.

The athletes didn’t seem to worry about the circumstances and restrictions.

“Yes and no,” Moore said. “When I go out in public, I wear a mask, wash my hands before and after. And you don’t know who has and who hasn’t done that.”

“I know it’s real,” Kinser said. “But none of my family members have it, nobody I know has had it. And I wear protection at work. This is just being able to see everybody and talking to everybody. I just sat at home, or worked six days a week, or shot at home and worked out on the track.”

BNL will maintain a schedule of workouts the next three weeks. While several scheduled scrimmages with other programs have been cancelled, the Stars still plan to attend a camp at Indiana Wesleyan at the end of the month.

It’s all about taking the steps toward normalcy. Even if it’s not.

“It’s not like June,” Kinser said. “I’m used to playing basketball in June, then having July off to show animals. But we’re excited.”