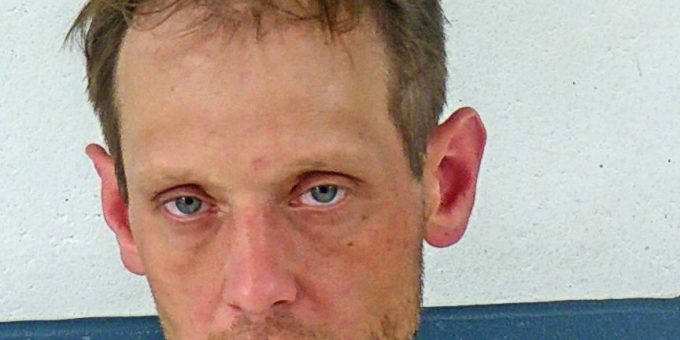 (BEDFORD) – A Bedford man was arrested on Saturday night after a report of a possible intoxicated man at the Avoca Mini Mart on State Road 54 and an employee wanted the man removed from the property.

The employee had secured and locked the door to the mini-mart until the police arrived.

When officers arrived they found 39-year-old William Caudill in a small blue pickup truck located directly in front of the mini-mart.

Caudill exited the vehicle with his keys in his hands. He then placed the keys in the bed of the pickup and spoke with officers.

Police learned Caudill was driving with a suspended driver’s license. They also noticed Caudill’s pupils were constricted and pin-pointed and he was slow to answer questions.

Police then noticed that Caudill’s pockets were turned inside out as if he was attempting to quickly empty his pockets prior to speaking with police.

Officers believed Caudill was intoxicated on a controlled substance.

K-9 Flek was deployed to do a free-air sniff around the exterior of the truck and alerted police to possible drugs in the vehicle.

During a search of the truck, officers located a small plastic cigarette wrapper that contained three pieces of a round white-colored pills later identified as Buprenorphine Hydrochloride 8 mg, a controlled substance, available only with a valid prescription from a medical physician. Police also found a cut red straw known as a “rooted” used to snort the drug.

Caudill admitted the pill was a “Subutex”, a marketed name for Buprenorphine Hydrochloride. Caudill also stated that he did not have
a valid prescription for the medication and he had obtained the pill by purchasing it from a “friend” approximately a week prior to my contact with him.

Caudill was arrested on a charge of possession of a legend drug, possession of drug paraphernalia and issued a citation for driving while his driver’s license was suspended.